Which Side Are You On? An Open Letter to the Democratic Lawmakers of Wisconsin

Dear Democratic Lawmakers of Wisconsin,
I'm writing to urge you to do whatever you can to strongly support the exercise of free speech in the State Capitol. The arrests of citizens this past week was a shameful display altogether contrary to the Wisconsin way and a terrible deterrent to citizens petitioning their government, which is their right. I was happy to see Senators Cullen and Jauch and Representatives Taylor, Sargent, Hesselbein, Pope, and Kolste present in the rotunda at noon on Thursday. Support from our elected officials is essential. 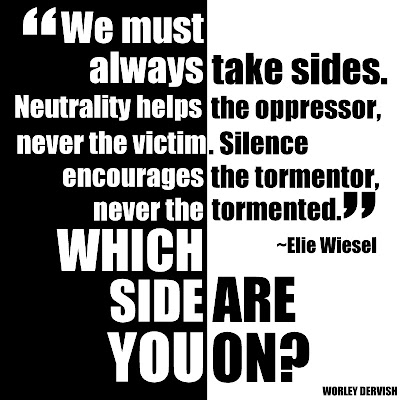 I see that Senator Risser and Representative Taylor have requested a meeting with DOA Secretary Huebsch. Please request to be involved in that meeting, if it ever takes place, and advocate for a peaceful and reasonable solution to the escalating conflict.

Given that participants in the Solidarity Sing Along routinely go outside, regardless of the weather, when there is a permitted event in the rotunda, and that the sing along takes place during nonworking hours, some understanding should be possible. It does not make sense for participants to get a permit, in part because the Sing Along is an activity—after more than two years, it is a tradition! It is not an organized group. The participants are peaceful citizens who believe that our right to free speech should never be abridged, and we honor and respect the rights of others to use the space as well, regardless of how the DOA and the media spin it.

I myself received a citation for my participation in the Solidarity Sing Along on October 31, 2012, and my trial has been postponed several times now (it's currently scheduled for next month). Being ticketed for singing over the noon hour in the rotunda, which was built precisely for the purpose of peaceable assembly, the right to which is enshrined in both our state and federal constitutions, is beyond ridiculous, not to mention being a complete waste of taxpayer money and the courts' time and resources.

The increased aggression from the Capitol Police is very alarming. We need our elected officials to step up and speak out. Please do all you can on our behalf.