What's Next in the Fight for Women's Reproductive Rights?

Some practical suggestions about stepping up active involvement in the fight for women's reproductive rights.

Join, get involved in, and donate to local and state organizations such as the following (I'm listing Wisconsin organizations, but you get the idea.)

Talk to others, especially other women, about what you're doing and discovering. Develop your own network of activist friends and then invite others into that network.

Show up! Whenever you can. When there's a meeting or an action, be there. And bring a friend.

Well before the next election season, sign up to learn how to help others register to vote. We will need to mobilize like never before.

Take good care of yourself and have fun. We're in this for the long run. 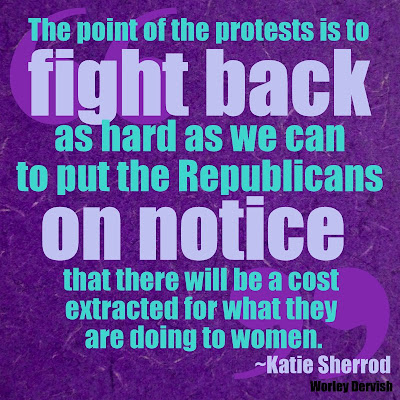 
On the eve of the Fourth of July, we all need to remember that "the price of liberty is eternal vigilance" (usually attributed to Thomas Jefferson, but which Jefferson probably got from the statement "The condition upon which God hath given liberty to man is eternal vigilance" by the Irish statesman John Philpot Curran.)

Remember, we all knew from the beginning that nothing will stop this draconian anti-abortion legislation from eventually passing in the Texas Legislature because the Rs have a majority in the House and the Rs in the Senate will not enforce the 2/3s rule in the Special Session. (I love the way the pundits keep pointing that out, as if we hadn't noticed. We women just need so much help, don't we?).The point of the protests is to fight back as hard as we can to put the Rs on notice that there will be a cost extracted for what they are doing to women.

So what happens after it passes?

Court challenges in the short term, and expanding voter registration, voter education, voter turnout in the long term. The numbers of young women and men who have been galvanized by this issue are important, and now the job is to keep them involved, engaged, and turning out. This is especially true in the Hispanic community, in which young people are much more progressive than parents and grandparents.

So Texans have their work cut out for them.

What can an outsider do? Donate to groups who are organizing this. Donate to Planned Parenthood. Donate to the Texas Democratic Party.

And pray. Pray that we have the necessary strength, courage, and stamina this will take. We can do this. We will do this.