Robber Barony Is Back

Shows the submerged 90% of us earn the same (per family) in real terms as we did in the late 1960s. Yet the typical family now has more wage earners, working more hours.

Shows the hunting animals eating the entire carcass except during 1942-1981, when we had effective antitrust law, labor law, and progressive taxation.

The rich get their income not for what they do, but for what they own.  They claim to be "job creators."  In truth, the only job creator is a customer, who buys something.  We have to get money back in the hands of those who spend it--the nonrich.  When the only people with money to spend have all the stuff they can use, the economy collapses.  These booms and busts happened regularly up through the Great Depression.  It was political action that transformed the working class into the middle class, avoiding the booms and busts.  Deregulation, detaxing the rich, eroding worker rights, free trade, since 1981 are bringing back the bad old days of many serfs, one lord.  Only political action can reverse the trend.  We have to restore antitrust laws, restore workers' rights, establish fair trade not free trade, tax the rich.

Norway has a much fairer balance of power between employees and employers, partly due to nationwide collective bargaining.  U.S. labor laws have been eroded since they were enacted in 1935, by anti-labor court decisions and anti-labor legislation.  Now, management can ignore labor agreements and labor law without serious consequences.
Posted by TomRW at 1:21 AM No comments:

Stand Up to Our President

Paul Krugman opines that Obama should stand up to Republicans.

Obama's preparedness to make a whole range of compromises will be at the expense of the 99%.

It is we who must stand up to our president.  We have to prevent him from selling us down the river.
Posted by TomRW at 2:43 AM 1 comment:

So here in Wisconsin this week we won some and we lost some. Seems like the stuff we won was pretty big, but the stuff we lost isn't exactly small potatoes either. Thanks in large part to gerrymandering, both branches of the state legislature are once again under Republican control, although I hear tell that Democrat Jessica King has not conceded in the 18th Senate District.

We'll have to be more vigilant than ever against Walker's dirty tricks and the yet-to-be-enacted portions of the ALEC agenda. I've heard folks mention right-to-work legislation and mining as two serious threats to the state's Common Good. Amy Goodman says "now the work of movements begins," but here in Wisconsin, the Uprising that began last year must take a deep breath and continue to work against the plundering of our precious resources for the benefit of the 0.01%. In other words, very little has changed on a statewide front. The fix is still in, and the fight is still on.

On the national front, though, the news is pretty damn good. If you're unimpressed by what happened on Tuesday, listen to what Rachel Maddow has to say about it. We have banished the ghoulish specter of a Romney/Ryan/Rove takeover. The anti-woman politicians took a well-deserved whooping, while more women are being sent to Congress than ever before. Marriage equality and marijuana legalization made significant steps forward. A larger proportion of young people, blacks, and Latinos voted than in 2008. It was a great night for diversity all around. These aren't just victories to be celebrated. They're opportunities to be pounced on.

The really good news this week is not what we have accomplished, but the opportunities that are now open before us. We have some serious political momentum to capitalize on, and we must not let it go to waste. We progressives should feel empowered by Tuesday's election results. Here's what I hope we'll do with this bright, shining moment:

Just Say No to Right-Wing Extremism. And say it loudly and repeatedly. We have had way more than enough of the hatred, paranoia, ignorance, and fear-mongering of the factually challenged rabid right. I don't care how the Republican party attempts to reframe itself. This nastiness has got to go. It has no place in our national discourse. It is a hindrance to everything that needs to be done for the Common Good.

By "just say no," I mean call what's unacceptable unacceptable. Speak up. You know—in a civilized way. Don't just nod politely. Silence = assent. Practice in front of the mirror if you have to, but say it. Calling out a friend, an acquaintance, or a family member on their hate speech, misinformation, or fear-mongering can be as simple as asking them a question about what they really mean, what they really believe. Press them. Have a serious conversation. Don't just let it pass. It's time to take back the reins of our public discourse, one conversation at a time if need be. On the people you encounter every day, you are likely to have far more influence than you realize. This is true activism. Bear witness to the truth.

Push Hard Against Obstructionism. The bullying and tantrum-throwing in Congress must cease. The work of the People has been put on hold for far too long. The right-wing agenda of ensuring a single-term presidency for Obama has failed. I hear tell that Harry Reid intends to pursue filibuster reform. This is no easy task, especially given the colossal dysfunction of Congress. But a multifaceted, noisy push from the People might be enough to make all the difference. If Senator Reid really goes after filibuster reform, let's back him up and give him as much boisterous support as we can.

Push Back Against the Big-Money Robber Barons. Overturn the absurdly named "Citizens United." Tax the rich. Close the loopholes. Regulate Wall Street and the banks. Make this—again—the land of opportunity, not just for the very few, but for all. Strengthen the middle class and give a helping hand to the disadvantaged. Support the Wisconsin Democracy Campaign and keep up with what's happening with big money in politics.

Advocate for Peace and Civil Liberties. Push back against the NDAA, the drones, the kill list, and war without end. Part of the reason the Obama Administration gets away with these assaults on civil liberties is because we let him. People aren't paying close enough attention. Progressives are focused elsewhere. So shine a bright light. Let Obama and Congress know, let everyone know, that these assaults on fairness and decency are utterly and altogether unacceptable and will not be tolerated under any circumstances.

Go Green. Sign up for emails from 350.org and Clean Wisconsin, read them, and participate however you can. This is our one and only planet, and it's clearly in dire distress. We must—all of us—do what we can to mitigate the damage we've already done with our greedy, careless ways.

And did I mention saving the post office and standing up for workers' rights and immigration reform? 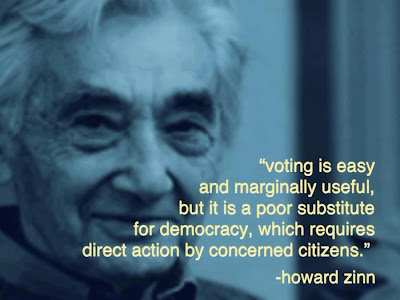 Voting is all well and good. Yes. Do it every chance you get. But if we're going to save democracy and save the planet, much, much, much more is required. Whatever you do, determine to be more involved, more active, better informed, better connected.

I've heard it said that if you don't do politics, politics will be done to you. But it won't just be done to you; it won't just be you that suffers. If we fail to make use of this moment, many will feel the effects of our inaction. Nothing less than the well-being of the planet is at stake. Truth, freedom, justice, and peace are calling. If you're a living, breathing human being, you can't afford not to answer.

# # #
Thanks to Occupy Marines for the Howard Zinn image.
Posted by Unknown at 4:50 PM No comments: