According to this story in the Health section of the New York Times on Saturday, "Neither the system meant to make the meat safe, nor the meat itself, is what consumers have been led to believe."

Deadly e coli strains from shitty hamburger sicken hundreds. Some are incapacitated for life. To save 20 cents a pound, grinders use scraps bought from many different slaughterhouses, and mix them all together. Slaughterhouses refuse to sell to grinders that test incoming scraps for E. coli. If grinders were to test, slaughterhouses would have to recall contaminated meat. That would lose them the sale of that contaminated meat. Instead they demand that grinders not test. Grinders comply. The USDA is okay with this.

Dr. Kenneth Petersen, an assistant administrator with the [USDA’s] Food Safety and Inspection Service, said that the department could mandate testing, but that it needed to consider the impact on companies as well as consumers. 'I have to look at the entire industry, not just what is best for public health,' Dr. Petersen said. [emphasis added]

The Food Safety and Inspection Service must be moved from the USDA to the Food and Drug Administration. Only by removing inspectors from the control of an agency tasked with promoting its industry will those inspectors be free to fulfill their purpose of protecting the public.

In the post-Reagan United States, the highest good is seen as company profit. Food safety, worker safety, and environmental protection are to be done away with. This first became clear to me in 1994 when Newt Gingrich trumpeted his contract on America. That it continues under Democratic administrations is worse still.

~~~~~
Mary's 2 cents: Over and over again our government sanctions greed and profit, protecting corporations and shielding them from accountability, risking considerable and serious harm to individual consumers.

I refuse to live in a country like this anymore—and I am not leaving.
—Michael Moore

Over and over and over again former lobbyists from various industries are hired to regulate the very industries they previously represented as lobbyists. Something about that just smells wrong, doesn't it? And this malodorous putrefaction continues assaulting the national senses regardless of which party is in power. The moneyed interests don't really care all that much who is "in power," because they can all be bought, for pretty damn cheap. 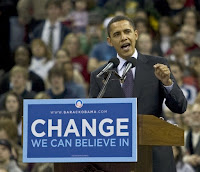 So we had this great landslide election last year, and we celebrated with tears streaming down our faces and cheered until we were hoarse because we'd ushered in "change we can believe in." But at the Fighting Bob Fest last month, Jim Hightower reminded us that what we won last November was "a chance to make progressive change" and that "our agitation is more important than ever."

In an article entitled "Ignore and Consent," Daniel Schulman recounts the "vetting" last week in the Senate Agriculture Committee of Scott O'Malia, who is "a Republican Senate staffer selected by President Obama to fill an open seat on the Commodity Futures Trading Commission."

According to the CFTC website, "Congress created the Commodity Futures Trading Commission (CFTC) in 1974 as an independent agency with the mandate to regulate commodity [agriculture and energy] futures and option markets in the United States." This is no mere advisory committee (some clout); this is a regulatory agency (more clout).

But according to a previous article Schulman coauthored with David Corn,

O'Malia . . . worked as an aide to [Senator Mitch] McConnell [R-Ky.] for nine years before becoming the director of federal legislative affairs for Mirant, an Atlanta-based electricity company. At Mirant, according to House and Senate records, O'Malia was registered in 2001 and 2002 to lobby for deregulation on a number of legislative fronts. [emphasis added]

Doesn't that just give you goosebumps? Oh, those lucky hens to have such a conscientious guardian for their henhouse!

During his campaign for the presidency, Barack Obama had this to say about about the role of lobbyists in government:

We're here because for too long, the doors of Washington have been thrown open to an army of lobbyists and special interests who've turned our government into a game only they can afford to play—who have shredded consumer protections, fought against commonsense regulations and rules of the road, and distorted our economy so that it works for them instead of you....

This change will not be easy. It will require reforming our politics by taking power away from the lobbyists who kill good ideas and good plans with secret meetings and campaign checks. [emphasis added]
—Barack Obama, Green Bay, Wisconsin, September 22, 2008

Do the folks in the administration think we have forgotten this stuff? Do they think we gave the Dems a mandate because Obama is a swell guy and we like his panache? No question, Obama knows how to talk the talk. But we need to see some better progress on walking the walk. Since when does "change we can believe in" equal "business as usual"?

Then there was this little snippet today at MSNBC's FirstRead: "A new Obama administration policy limiting the roles of lobbyists on federal advisory committees is stirring up 'absolute fury,' a lobbyist is quoted as saying." "Absolute fury," that is, on the part of the lobbyists. Poor things. Absolute fury. Can you imagine? This potential reform is mild compared to the shakedown that's in order. I'll call your "absolute fury" and raise you one "populist outrage."

So, it's time to agitate (I'm agitated, aren't you?) and make the most of the chance we gave ourselves last fall to make real progressive change. Write to members of the Senate agriculture committee and tell them boot the foxes out of the henhouse.
Posted by Unknown at 1:02 PM No comments:

From 1980 to 2005, more than four-fifths of the increase in the nation's income went to the highest-income 1%. Share of total income going to the highest-income 0.1% rose from less than 4% in 1981 to more than 12% in 2007. Why? Top tax rates plunged. In 1981 the top marginal tax rate was 69%. In 1982 it dropped to 50%, permitting the income share of the top 0.1% to more than double in just the first five years of lower taxes on the rich. From 2003 to 2007 the top rate was down to 35%--and the highest-income 0.1% were absorbing 12% of the nation's wealth.
This is clearly too low to prevent the ever-increasing concentration of wealth. The natural progression continues until the only people who can spend money don't need to, and the economy collapses.
Piketty and Saez (pp. 79-81) show that under the high-tax regime of the 1940s through 1970s, share of income to those at the highest income remained quite constant for decades. (About 33% to 35% going to the highest-income 10%; about 10% to the highest-income 1%; about 3-4% to the highest-income 0.1%.) It's only since 1981 that the lid has blown off the ability of the rich to amass ever greater amounts of the nation's wealth.
Confiscatory taxation is one of the most important functions of government. Progressive taxation is uniquely effective at combating the natural tendency of the rich to get richer and everybody else to descend into serfdom.
Let

"Income" includes all income, including capital gains (which should be indexed to inflation), and including inheritance. "Income" should exclude income taxes owed to state and local governments on the current year's income. (It's important to exclude state income tax, to prevent the total tax from exceeding 100% for absurdly high income.)

The rich would still be rich. But the rate of widening of the gap would slow. And we would slow the rise in federal debt.

It's also crucial to institute progressive corporate tax. Corporations become ever larger, wealthier, more able to dictate market prices, supplier prices, wages and working conditions, and able to buy political influence to rewrite laws in their favor. They can increasingly soak us, their customers, squeeze their suppliers, keep their workers down--driving us all into serfdom except the business barons.


the vertical axis is corporate tax rate and the horizontal axis is the ratio of corporate income to household poverty level.


A progressive tax on business profit would counter the corporate desire for mergers and acquisitions, creating ever more monopolistic conditions.

Of course, we also have to restore all the Progressive Era reforms begun in the Teddy Roosevelt administration and dismantled in and since the Reagan administration. Restore antitrust regulations, financial market regulations, food safety regulations. Repeal the anti-union changes to the Labor Act since 1935. Pass the Employee Free Choice Act.

We must stop subsidizing U.S. agribusiness overproduction of corn, soybeans, cotton, and wheat--which are then dumped below cost on Mexican and Central and South American markets, destroying agricultural economies and forcing millions of people to come to the U.S. seeking unauthorized work. These people are abused with impunity by their employers, because they are afraid of being deported. The availability of millions of zero-status workers drives down wages and working conditions for native U.S. workers.

Natural processes, left unchecked, yield a world of a few owners and the rest of us serfs.

Only aggressive, vigilant government action can keep these forces at bay.

Only aggressive, vigilant citizen involvement in the political process can ensure the government does what we vote for, rather than what the moneyed interests pay for.
Posted by TomRW at 2:11 AM 4 comments:

I refuse to live in a country like this anymore—and I am not leaving.
—Michael Moore

Haven't seen Capitalism: A Love Story yet? Stop everything and make haste to the nearest movie theater. You really don't want to miss this, and the sooner you see it, the sooner you can get with the program. Moore is audacious. He's gutsy. He's irreverent. He's right.

Our root problem as a nation is that we are being run—and overrun—by corporations whose only value, whose only vision is the bottom line. Do we want to be a country run and bullied by greedy bastards? Or do we want to be a people who does their best to respect each other, to treat each other fairly, to protect the most vulnerable in our midst for no reason other than that they are our most vulnerable. They are our people. Not just strangers down on their luck or unwilling to take responsibility for their own lives. They are our people, and we are a people who do what we can to support and protect each other.

We can do better. Much better. And we must do better. If we disengage, things will get much, much worse in a big ol' hurry. And there will be much more suffering before we get ourselves on a better path.

We've been fed a lot of assumptions and propaganda about capitalism. It's time to reexamine them and to examine the alternatives.

I don't always agree with Noam Chomsky, but he never fails to be thought-provoking. So here's a start on examining the alternatives to capitalism.

We'll look at more alternatives, more ways to get involved, and more ways to move the Revolution (with a capital R) along in the coming weeks.
Posted by Unknown at 10:37 AM No comments: