Personal Connections and Transformations: Learning to Embrace "The Gay"

I was pleasantly surprised this week to read about Senator Rob Portman's change of heart regarding gay marriage. A few comments I read expressed regret that it required a personal connection—Portman's son is gay—for him to reevaluate his position. But I contend that nearly all of our best and most important transformations are prompted by personal connections. What was once theoretical becomes immediately, achingly personal, powerful enough to blast through our preconceived, long-held beliefs. We can all be glad that Portman was willing to let his personal connection to his son change his beliefs. Many of us know of parents who are unmoved and unsupportive when their children come out. Thank God for those who do better.

Few people are able to effect such metamorphoses only on a theoretical basis. It's a big reason why the personal really is political. And it's why, with fewer and fewer gay people staying in the closet, more and more of us are being transformed by those personal connections, to the extent that marriage equality is indeed beginning to look inevitable. These days we all have friends, cousins, brothers, sisters, fathers, mothers, mentors, and heroes who are gay. If your heart is open to them, then it is necessarily open to marriage equality and justice. Such is the nature of the personal connection.

For example, when I was younger, I was an enthusiastic evangelical Christian (whereas nowadays I'm a mild-mannered, unassuming Episcopalian). I believed that homosexuality was wrong for the simple reason that people I loved and trusted told me it was wrong, and I didn't have any better information than that. One of my very best friends also believed what we were told; only for him, it was anything but theoretical. Because he was gay.

I met Patrick in high school when we were on the newspaper staff together. I went to the same university Patrick did, and seeing as how he was a year ahead of me, he took some pleasure in showing me around the big U. We did the obligatory bar-hopping tour, and he introduced me to the very exciting if somewhat daunting Plato system—my very first encounter with a computer! He was brilliant and funny and always kind. He studied Hebrew, Greek, Japanese, Russian, and Arabic just because he enjoyed learning them. He learned American Sign Language and rode a unicycle all over campus. I affectionately called him Petruchio (the romantic lead in The Taming of the Shrew). He was my very best friend from 1974 until he died at the tender age of 32 in 1987.

When I had a religious conversion experience in December of my freshman year (1974), I took Patrick along for the ride. He came to church with me and joined the same Christian group on campus. We had known each other—very well, I thought—for maybe eight years before he told me about his sexual conundrum: he was attracted to men. I was shocked. No one had ever come out to me before. It was totally outside my sphere of experience or understanding. Still, neither of us questioned what we had been taught. 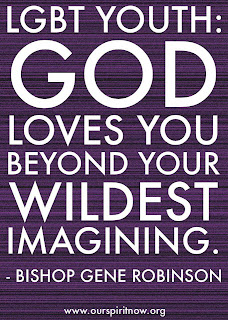 Patrick struggled mightily to resist temptation, and he despised himself because he wasn't able to change. I will never forget him dissolving in anguished tears on my couch. His "failures" consisted of loveless, anonymous sexual encounters, after which he would castigate himself and resolve to do better. It was a nasty, vicious cycle of torment and self-loathing. Only a few months before he contracted HIV, Patrick said how lucky he was not to have come down with some dread disease. Obviously, his luck didn't hold.

Patrick moved to Texas a few years before he died. The first time I went to visit him there we were both struck by how nice it was to be with someone with whom we didn't even have to finish our sentences to be understood. Then he told me about his diagnosis. Back in those days, HIV was a swift death sentence. I went to Texas to visit him twice before he died.

The first time I saw him after he was diagnosed with AIDS, I was stunned by his appearance. He looked like a concentration camp survivor. For the first half hour or so I was with him, I found it difficult to breathe, as though I'd been struck on the back and had the wind knocked out of me. The change in him was so hard to process. While others shunned him, feared contagion, and worried about sharing a salad with him (I kid you not!), I cooked enormous amounts of food for him because I noticed that no matter how much I put in front of him, he ate half. I cleaned his bathroom and organized his cornucopia of prescription drugs. I never considered doing anything less. This was my Petruchio. What else could I have done?

I read as much about AIDS as I could get my hands on (most notably, And the Band Played On, by Randy Shilts) in the vain hope that understanding what was happening to Patrick would help me cope. I ran interference between him and his mother. When he lapsed into a coma during the last month of his life, I insisted that his mother hold the phone up to his ear for ten minutes every day so that I could prattle at him, whether he could actually hear me or not. Finally, I picked out where he would be buried and made arrangements for his funeral (the first funeral home I called didn't want to handle someone who had died of AIDS).

Patrick died on July 12, 1987. For years afterward I was furious with God, not because Patrick had died but because he died what seemed to me to be a small, miserable little death. He was in denial about his impending death right up to the end. He never faced himself or his disease. But to me he was so precious, so beautiful, so extraordinary. He deserved so much better. I know now, too, that I was uncomfortable with Patrick's rejection of his gayness, even though I wasn't ready to fully accept it either.

During that time, I began experiencing what is sometimes referred to as cognitive dissonance—my experiences didn't jibe with my beliefs. I talked to some friends who were gay and asked them obnoxious, personal questions like "Do you still consider yourself a Christian?" and "When did you realize you were gay? What made you think that?" I knew a lesbian couple whom I loved very much (still "hating the sin while loving the sinner"). I realized one day that I liked them very much as a couple, and I couldn't imagine them in relationship with anyone else. Gender didn't really even seem to come into it. They were just right for each other.

In 1991, I moved to Madison, where I began attending an Episcopal church, still pretty mad at God and still confused. There I met Clay, who was our choir director. I learned not long after I met him that Clay was married to his partner, John. When I went to their home, I looked through their wedding album. It was oh-so-ordinary. And lovely. I finally thought to myself, "Well, maybe in an ideal world, people wouldn't be gay. But since when was this ever an ideal world?" I was still processing, still questioning, and not quite ready to fully embrace and celebrate "the gay," but no longer willing to judge or reject just because I was taught to.

I found myself wishing with all my heart that Patrick could have been able to enjoy what Clay and John had: a loving, committed, fulfilling relationship. How vastly better than furtive, anonymous, life-threatening sexual encounters followed by weeks of self-loathing and unremitting remorse. I loved being with Clay and John, because I found their love healing and comforting. I let go of the last of my reservations in the shelter of their love for me and for each other.

In 1997 Clay started Perfect Harmony, Madison's gay and gay-friendly men's chorus. I got to sing the part of Dorothy for "Over the Rainbow" in their very first performance. Imagine being the only woman singing with a chorus of 25 men. It was glorious! At many of the Perfect Harmony concerts for several years after that I got to sing either solos or ensembles with the men. It was thrilling. One year I sang "Have Yourself a Merry Little Christmas" and leaned a little extra on the line "Make the Yuletide — gay," to the audience's delight. Clay said to me at one point, "You know, most of the audience probably thinks you're gay." The thought hadn't occurred to me. I paused for a moment, smiled, and said, "Cool! I'm honored." I think you could say that by then my transformation was pretty well complete.

As it happened, Clay also had AIDS, only by that time treatments were much better, so he lived with his disease for ten years (instead of Patrick's ten months) before he died. And John, Clay's husband, was a nurse, so Clay was very well cared for during his illness. I got to visit him the day before he died. "You're going to die too, you know," he said to me. I assured him that I knew. He also told me he'd look up my friend Patrick when he got there, wherever "there" is. I still love the thought of them meeting each other.

The day before he died, it seemed like the veil was already disintegrating for Clay and he could see well beyond it. He faced his death with courage and even joy, ready for whatever came next. His funeral was one of the most beautiful church services I've ever been to. Because he had picked out all the hymns and the readings, his presence was palpable. I felt so close to him. His was a good, courageous death, unsullied by self-loathing and recriminations. It was the perfect counterpoint to all that had distressed me so deeply about Patrick's death.

I'm no longer angry at God. I celebrate both Patrick's life and Clay's. I'm grateful that God made them exactly as they were. Had they not been gay, they would not have been themselves. And who they were is one of the greatest gifts God has given me. I have been enriched beyond measure by knowing and loving them. And I'm so grateful there was more to the story of "the gay" than what I was first taught. I have had the remarkable experience of personal connection, transformation, and love. I wish Senator Portman—and his son—much joy as they navigate the experience of connection and transformation together.

# # #
"Our Calling," artwork and quotation by Ricardo Levins Morales.

"LGBT Youth" is from Tumbln Spirits on Tumblr.

The "Inclusiveness" Window at McKinley Presbyterian Church, Champaign, Illinois, was installed in 1997 in honor of my late
mother-in-law, Carolyn Juergensmeyer Worley, longtime member of McKinley's Social Action Committee and a woman with as kind, generous, and accepting a heart as anyone I've ever known.


To our knowledge, this is the only stained glass window devoted to inclusiveness as a theme in America. Symbols abound and the most dramatic is at the top. A pink triangle set against a white Celtic cross recalls the suffering and repression of GLBT persons at the hands of the Nazis in Germany in the 30’s and 40’s. Also included are the rainbow flag, an AIDS ribbon, and male and female hands clasping one another and supported by the hand of God.