Recently we've seen a lot of iconic images of police brutality against peaceful protesters from all over the country. 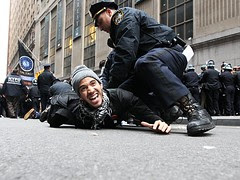 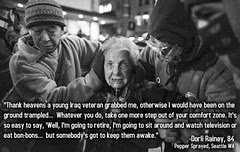 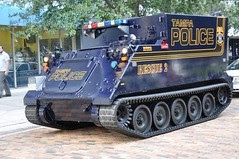 From New York City to Tampa to Denver to Oakland and Davis, California, police are apparently under the illusion that violence is an appropriate response when the people exercise their constitutional right to free speech and peaceable assembly to petition for a redress of serious grievances.

But in Madison, Wisconsin, site of some of the biggest protests in the country earlier this year and just a few days ago, the police have by and large protected our right to peaceably assemble. This past Saturday, between 25,000 and 30,000 protesters demonstrated around the capitol square in Madison in support of the effort to recall Scott Walker, and according to the Milwaukee Journal-Sentinel, the capitol police had "reported no arrests as of Saturday afternoon." No arrests. No brutality. No pepper spray.

On February 19 of this year, soon after Walker et al. launched their heinous all-out attack on workers, schools, and health care in Wisconsin, the Madison police went so far as to commend Wisconsin protesters on their good behavior:

SATURDAY'S CAPITOL SQUARE DEMONSTRATIONS
Law Enforcement Praises Protesters' Conduct
On behalf of all the law enforcement agencies that helped keep the peace on the Capitol Square Saturday, a very sincere thank you to all of those who showed up to exercise their First Amendment rights. You conducted yourselves with great decorum and civility, and if the eyes of the nation were upon Wisconsin, then you have shown how democracy can flourish even amongst those who passionately disagree. ... The goal of law enforcement has been to provide a safe environment for democracy to take place. That goal has been realized for yet another day.

"The goal of law enforcement has been to provide a safe environment for democracy to take place." That was very cool at the time, but in light of recent events, it's extraordinary. So let's turn it around, shall we? 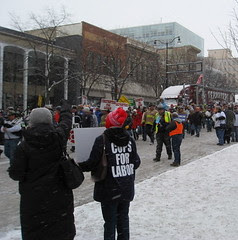 I'm sure I'm not alone in my gratitude for the police who have supported our efforts and our right to peaceably assemble. Thank you for not pepper-spraying or clubbing us, for not telling us we can't exercise our constitutional rights. Thank you for treating us with dignity and respect rather than with violence and brutality. Thank you for not hurting our friends and family—the elderly and the very young—who have gathered with us. You are truly a shining example in what otherwise is a dark night of shame. Just as the rest of the nation has been inspired by Wisconsin protesters, we hope that the nation's law enforcement agencies will be similarly inspired by you.
Posted by Unknown at 4:12 PM No comments:

Norquist Beyond the Thunderdome

In an interview with The Huffington Post, Norquist felt the group only represented liberal interests. "They were there with a heavy partisan message," Norquist told HuffPost Thursday. "The kinds of arguments I got from these old people weren't interesting when I was 12, the left has not advanced. These guys are Democratic Party hacks. [emphasis added]

Norquist, full-time lobbyist, president and founder of Americans for Tax Reform, who has never run for office much less been elected, is advocate-in-chief for the extreme right-wing no-taxes-not-ever, drown-government-in-a-bathtub political ideology. According to Norquist, paying taxes is not just a partisan message, but a "heavy partisan message." Since when is taxation a left-wing idea? As Mr. Norquist well knows, some Republicans actually believe in taxation. Norquist's hubris allows him to believe that it's up to him to determine what's left and what's right. No doubt he also believes that government is a left-wing idea. And democracy. You know, radical lefty stuff like that.
Norquist (age 55) calls the members of the Patriotic Millionaires who went to visit him "old people." "Old people"? Who does he think he's talking to? A bunch of never-trust-anyone-over-thirty teenagers? I wasn't able to find out exactly which group members met with Mr. Norquist, or exactly how old they are, but in what I found it didn't appear that any were more than about ten years older than old Norquist, and one or two were younger. Check out this photo of the visiting old-geezer delegation of millionaires. Funny how Norquist seems to fit right in with the old white men at the table, isn't it?

"The kinds of arguments I got from these old people weren't interesting when I was 12." Really? Aside from there being very few 12-year-olds who find the idea of taxation especially riveting, since when is "interesting to a 12-year-old" a criterion for the validity of an idea? Norquist is freely admitting here that what he found uninteresting as a 12-year-old is still uninteresting to him today. And he's complaining that the left hasn't advanced?

Indeed he is. Advanced how? No doubt Norquist wants the left to move on from the tired old ideas of justice, equity, and democracy. Is he suggesting that the left should advance as the right has "advanced"? The most casual observation of the Republican presidential debates is indication enough of how the right has "advanced."
And finally, Mr. Norquist labels the Patriotic Millionaires who met with him as "hacks." Webster's Third New International Dictionary defines "hack" (as Norquist is using the word) as follows: "3 a : one who hires out his professional service : one who forfeits individual freedom of action or initiative or professional integrity in exchange for wages or other assured reward : HIRELING, MERCENARY.
Posted by Unknown at 11:50 AM No comments:

At this moment I'm printing out petitions—lots of them—on my totally crappy printer that I have to feed one page at a time. Don't care. Gotta print 'em. Gotta do it. 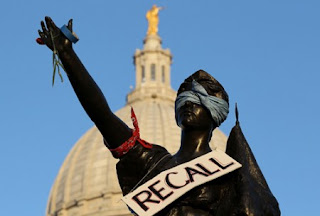 I would totally love to be able to go stand on a street corner or go door to door collecting signatures, but alas, my body just won't go along for that ride. So here's the plan: I'm going to take my li'l ol' clipboard with me everywhere I go until we're done. I'm thinking about hanging out at my local coffee dive with my clipboard nice and visible. And I signed up to help the recall folks in the office.
To print out petitions to recall both Scott Walker and Rebecca Kleefisch (the lieutenant governor), go to United Wisconsin to Recall Walker. On the right side of the page, click on "Print a petition for recall." You may have to futz with landscaping, as I did, to get the petitions to print out correctly. (The actual petitions are pages 2 and 3. The rest of the pages are instructions and talking points.) Read all the instructions carefully and follow them carefully.
Ten thousand signatures a day. That's how many we need just to get phase 1 of the Recall done. That's a lot, folks. So no slacking off. This is big-time serious business. If we really want this, and I know we do, we're going to have to work really hard for it. Don't worry about what you can't do. Just do what you can, and encourage your friends to do the same. Don't be ashamed to be a member of the clipboard army. In fact, you should be proud. Very, very proud. After all, this is what democracy looks like.
Posted by Unknown at 2:53 PM No comments: