Stanley Fish: University faculties need to unionize, so instructors have a voice in increasingly corporate universities.

William Cronon:
"McCarthy helped create the modern Democratic Party in Wisconsin by infuriating progressive Republicans, imagining that he could build a national platform by cultivating an image as a sternly uncompromising leader willing to attack anyone who stood in his way. Mr. Walker appears to be provoking some of the same ire from adversaries and from advocates of good government by acting with a similar contempt for those who disagree with him.

"The turmoil in Wisconsin is not only about bargaining rights or the pension payments of public employees. It is about transparency and openness. It is about neighborliness, decency and mutual respect. Joe McCarthy forgot these lessons of good government, and so, I fear, has Mr. Walker. Wisconsin’s citizens have not."

William Cronon is a professor of history, geography and environmental studies at the University of Wisconsin–Madison.

The Republican state senators' actions tonight, their attempt to ram through legislation that removes the abolition of collective bargaining rights for public employee unions from the so-called budget repair bill and addresses it in a separate bill (therefore obviating the need for the larger quorum required for financial bills), is clearly a last-ditch act of desperation that shows--yet again--Walker's and the Fitzes' true colors. 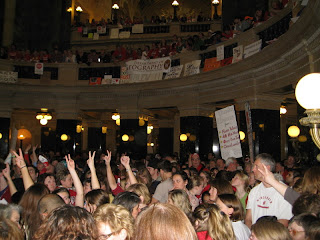 Not only will they not listen to the people of Wisconsin, but they hold the people in utter contempt.
Jon Nichols just pointed out on the Ed Show that the decision may have been made because the increasingly strong calls for recall of Republican state senators are putting real pressure on the legislators to break from the governor.
And given that the move is questionable legally, it may also be that Walker intended to provoke a violent response to aid the extremist propaganda machine in painting the Wisconsin protesters as a bunch of inconsequential, unruly, thuggish slobs.
Because we are definitely winning the good-behavior-vs.-bad aspect of the fight. The people of Wisconsin have behaved with dignified, persistent, respectful fervor; we have been remarkably peaceful. So much so, that the Madison police issued a press release commending the protesters for conducting themselves "with great decorum and civility."
Tonight's action by the extremists in the Wisconsin state senate is a nasty, heavy-handed affront to the people of Wisconsin. Walker's been saying all along that the move to strip collective bargaining rights from public unions was a fiscal issue. The move tonight is one more indication of how very untrue that was. Apparently he doesn't care how obvious it is when he lies.
What the majority of Wisconsinites want from their democratically elected officials is clearly of no consequence to Walker and the Fitz boys whatsoever. They are unwilling to listen to anyone who's not a billionaire backer.
The people who voted for Walker and the Fitzes last November did not elect them to strip unions of their collective bargaining rights, nor did they elect them to decimate Wisconsin's education and health care systems. I have tremendous confidence in the good, fair-minded people of Wisconsin, who have already shown their true colors day after day, in snow, rain, and sunshine, that this betrayal will not be met with complacency.
We won't back down, and we won't allow you to provoke us to betray our cause. We're showing our true colors, day after day after day, just as you are showing yours.
Posted by Unknown at 9:28 PM No comments:

You keep using that word...

I'm all for personal responsibility. But you keep using that word. I do not think it means what you think it means....
Why object so strenuously to the "redistribution of wealth" when in fact, in the last thirty years, we've seen the most massive redistribution of wealth the world has ever seen?
Why is it okay for Wall Street to tank our economy and then be rewarded for it? Where is the "personal responsibility" in that?
Why is it that welfare for humans is right out but welfare for corporations is fine?
And why is it okay for the rich to soak the rest of us, but the suggestion that the the super-rich should pay their fair share of taxes is "class warfare"?

Why do we persist in calling this a democracy when elected officials pay no attention to voters who have a modest income but can't do enough for the very rich? Pretty sure there's another word for a system of government that works like that.
Posted by Unknown at 11:45 AM No comments:

A Little Love Note to Wisconsin

I don't know just when it was that I fell in love with the people of Wisconsin. When Tom and I first moved here in 1991, we went to visit the beautiful Capitol building and took the tour, like we were a couple of tourists. It really is such a beautiful building. We stood outside on the balcony, way far up on the dome, and looked in one direction at Lake Monona and in the other direction at Lake Mendota. Then we looked at each other, giggled, and said, "We live here!" 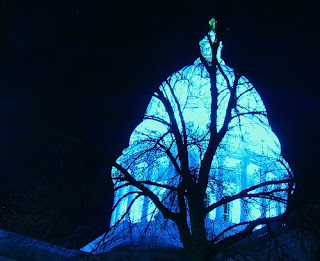 Not surprising that we should come to love living in the only city in North America built on an isthmus, especially seeing as how we came from south of the border, where the landscape was dominated by corn and soybeans. I was totally jazzed to live somewhere where people actually came on their vacations.
Even though we hadn't migrated all that far, we did have to adjust to a new culture and some new lingo. We learned that East Washington is never called that. It's East Wash. And the thing that you get a drink from in the park isn't a water fountain; it's a bubbler. We went through a fairly long phase of giving and receiving multitudinous obnoxious cow gifts. We became big fans of Lou and Peter Berryman. And we were blown away at the first local election we experienced, in which the Democrat won by a wide margin, followed by the candidate from the Labor-Farm Party, trailed a long way by the Republican. I can't remember which election that was, but it made a deep impression on me. Something along the lines of "I don't think we're in Kansas (or Illinois) anymore."
We still revel in living here, but not so much because of the scenery or the quirkiness or the politics. We've come to love not just Wisconsin, but Wisconsinites. They are smart, and hearty, and strong. They don't mind having a good laugh at their own expense. They are not vain, nor are they ostentatious. Not sophisticated or pretentious. And I'm not just talking about the people who live in Madison. The people in rural communities all the way up to the northern hinterlands are straight-talking brook-no-fools people with a lively sense of humor. They're fair-minded and honest and just good folk.
Much of what I've been feeling since Walker gave his draconian life-altering budget speech earlier this week is something akin to a mama bear defending her threatened cubs. I am fiercely angry, filled with outrage, disbelief, and righteous indignation. How dare they go after the very core of what it means to live in Wisconsin?
A big part of what makes Wisconsin wonderful is how brilliant and creative Wisconsinites are. And of course, Wisconsin schools are a huge part of what shapes those wonderful people. And they're under serious threat. Wisconsin's children are in danger of not being nearly as well educated as their parents and grandparents are. Education is a huge factor in determining quality of life, and Wisconsin's great schools are a big part of what makes this such a great place to live, even for us childless couples. There's nothing like being surrounded by bright people whose brilliance has been and still is valued and nurtured.
I can hardly believe that there are people in our state legislature and the governor's office who don't seem to value that, who make light of it, who deprecate our teachers and don't even consider that they have "real jobs" (according to State Senator Glenn Grothman). I'm filled with horror that somehow these weasels have found their way into our cow barn, as it were. But it also seems that in their overreach, they have poked a sleeping giant, a sleeping giant who isn't going to go back to sleep anytime soon.
So, people of Wisconsin, you rock! You rock the house! And you're right--that beautiful Capitol, it's your house! You are what really makes this a great place to live, and I am so proud of you for standing up for what's right and fair and not giving in and not backing down. I'm proud of you for your commitment to assembling peacefully in spite of extreme provocation. Every time I've been to the square in the last two weeks, it's been as much party as protest. People are so friendly and kind and caring. I always leave wishing I could invite you all home for dinner.
So sing along with me and Lou and Peter (to the tune of "My Bonnie Lies Over the Ocean"):

For the video of Lou and Peter rocking out on the square, click here.
And another loving tribute, more eloquent than I, here.
Posted by Unknown at 7:11 PM No comments: