Coming Late to the Controversy: Why I Love the Da Vinci Code

Last night I watched The Da Vinci Code on television—again. I've done this a couple of times now. First, I read the book not long after it was published. It was a good, rip-roaring romp with some intriguing ideas. Not that it's great literature. Mostly, it's just fun. And the controversy surrounding it makes it seem a little naughty. All the better.

Tom and I went to see the movie—yes, in a movie theater—when it first came out. (This would be unremarkable except that we do it so rarely. We love the comfort, flexibility, and flat rate of Netflix.) Liked the movie better than the book. Fun, fun, fun. And very satisfying.

I read some of what I came across about the book and film and watched the History Channel try to tease apart fact from fiction. For some, the story impugns the honor of Christianity and, more specifically, the Catholic Church. There seemed to be concern that the story would cause some to falter in their faith. Can I just say that faith that is shaky enough to be rocked by a fictional romp needs to be shaken—and reexamined—at length. 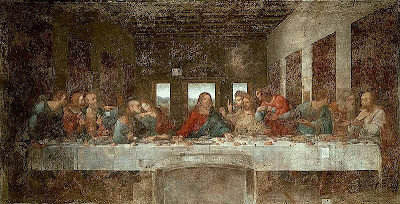 So that you know where I'm coming from: I'm an eclectic Episcopalian and a former evangelical. I find much to be admired in other spiritual practices and occasionally do a little borrowing, but mostly I believe in the full divinity and full humanity of Jesus the Messiah. I hold my faith both fiercely and lightly, depending on the context.

My understanding of Christian orthodoxy is that Jesus is both fully human and fully divine. Why or how would his life or mission on earth be diminished if it turned out that he was married to Mary Magdalene? I just don't get that. Maybe being a little more human makes his divinity less certain? How, exactly?

Of course, when discussing Christianity, reason doesn't offer much assistance. Fully human while fully divine is a mind-blowing proposition in any context, at least if you really think about it. And yet incarnation is at the heart of Christianity. So reason can only take you so far.

So what is it about The Da Vinci Code that makes it so threatening to some people? Maybe for those who focus on his divinity, it's the possibility of Jesus being more fully human. But the Church teaches that Jesus is fully human, so this threat is hardly a new one.

Of course there is the obvious insinuation that the church has been involved in a centuries-old cover-up. But given the history of the church, that's probably not the worst accusation that's been hurled at it. And even if it were true, it wouldn't even be the worst thing that has been done in God's name. And although the church is presumably God's community on earth, it is a human institution, full of political intrigue and the ebb and flow of human power and connivance. No surprise there.

I think one of the main reasons for the controversy is the same reason that watching the movie, even in reruns, is so satisfying for me, a practicing Episcopalian. It chastises the church for its treatment of women. Let me say that again:

It chastises the church for its treatment of women.

Just writing that is cathartic for me. Regardless of the fictional nature of many of the book/film's assertions, there's little question that the church has seldom been a friend to women. Jesus himself clearly valued women, in ways that were sometimes shocking to his contemporaries. His conversation with the woman at the well comes to mind: the disciples were amazed to find Jesus deep in conversation with a Samaritan woman. It wasn't only the fact that she was a Samaritan that was shocking to them. It was that he was engaged in conversation with a woman in public. Rockin'.

But the church, on the other hand, has a long history of devaluing and dismissing women. One example, cited in the book/film, is the publication of the fifteenth-century misogynist tome The Malleus Maleficarum [the hammer against witches]. But there are many, many more examples that could be cited. At last, some inroads are being made to advance the status of women in the church. I'm proud that the presiding bishop of the Episcopal Church is a woman, a remarkable woman. And that my priest is also a remarkable woman.

Yes, those are good things. And there are a few other glimmers of hope. But the centuries of misogyny and patriarchy still weigh heavily on the church and play out in myriads of ways. Dan Brown may have played fast and loose with many facts in The Da Vinci Code, but the point he makes about the sacredness of femininity is spot on. If the church wants to flourish in the twenty-first century and beyond, it needs to pay heed and work diligently to elevate its valuation of women and of the feminine.
Posted by Unknown at 10:23 AM 1 comment: