How Can We Keep from Singing?!?!

Guest post by Ryan Wherley
Scott Walker and Mike Huebsch made a HUGE mistake. They should have just let us be, shouting at the top of our lungs, a few dozen strong and begging people to wake up and take action. Things are not only as bad as they were when hundreds of thousands of people took to the streets in Solidarity in 2011; they are significantly worse, as the GOP quietly ramped up their attacks while their "reforms" from the past two years are now on the books and wreaking havoc on our state's citizens.

I have between waiting for 14 months for them to make the egregious overreach against the rights of the people of this state that finally drove people to stand up and say, “NO FUCKING MORE." Well, it happened.


You started arresting peacefully assembled citizens for singing and being and holding a sign; working journalists; veterans quietly holding the American flag; women coming off major surgery while denying them their necessary crutches to get around without pain; senior citizens, including a brave married couple of octogenarians. You cowardly targeted select individuals for "enforcement" from your perch high above the ground floor because you don't like how often and how truthfully and forcefully they speak and sing truth to power. Well... one could understatedly say you may have crossed the line one too many times. You may have just reawakened the sleeping giant in Wisconsin, and I say bring it on.

After rushing up to the Capitol for ten minutes on my lunch break, I walked into that glorious building today at 11:58. It was sheer electricity mixed with nervous tension, as everyone knew what was about to go down after 22 people were arrested on Wednesday by a rabid horde of fifty officers summoned from the Capitol Police, State Patrol and DNR. Hundreds upon hundreds of citizens sang out in defiance as the LRAD was brought out and yet another illegal Unlawful Assembly was called. Virtually nobody left, everyone risking arrest... and the beautiful singing only intensified.

It felt like the Uprising of February 2011 all over again, with one major difference. Two years ago, we were a disparate group of individuals marching for a similar cause, but unknown to each other. But now, we're friends and family. Everywhere I looked were people who've stood alongside each other on the front lines in the fight against a tyrannical leadership for the past 29 months. If people were afraid, they didn't show it, because they knew their brothers and sisters surrounding them had their backs.

They should have just left us to our own devices. They should have let 15 of us exercise our First Amendment Rights by singing for an hour. Instead, I think they may have just sparked the new Uprising, this one with endless rhythmic chants replaced by endless harmonic songs. Hell yea. Feel the thunder.

Athough my new job and life circumstances prevent me from getting to the noon hour Solidarity Sing Along these days, I still have an hour or so after work every night before the building closes. As long as this soulless, unconstitutional and outrageously fascist crackdown on peaceful expression of dissent continues, I will continue to show up and sing as loudly, proudly and powerfully as I'm physically capable of mustering every single day. Every night they lock that building down, I want them to hear my voice echoing off the soaring marble dome as a reminder that we will not be silenced, we're still singing, we shall not be moved and we're sure as hell not going away. You're welcome to join me. I hope the Capitol Police like my voice by now, because they're going to keep hearing a lot of it until Walker calls off the dogs.

To the nearly fifty individuals who have been arrested as peaceful dissidents, some multiple times, for standing up for the rights of all of us in the past two days in Madison, you are all my heroes. Someday we will be victorious. After all, how can we keep from singing?!? 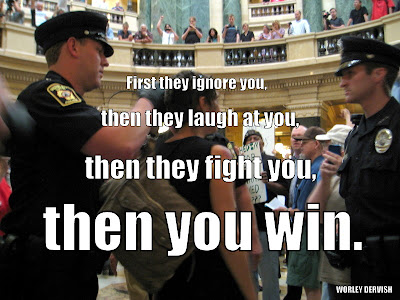