Freedom Is Never Free: It's Our Turn

In the last few days I have been so damn tired and discouraged and overwhelmed with sadness. I know I'm not alone. There was no justice for Trayvon, and there's not likely to be any. In the struggles for racial justice and reproductive rights, it feels like we're sliding backwards—and we are. A bit. Because freedom is never free, it's never safe, it's always under threat. If we are less than vigilant, our precious freedoms are eroded. 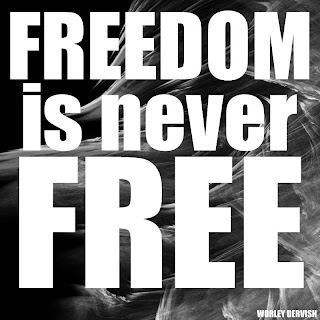 The events of the last few weeks drive home the reality that our freedoms are under threat. But this is nothing new. They are always under threat.

Many lives were utterly transformed by the civil rights and women's movements of the twentieth century. The work of those lovers of justice, their sacrifices, were not in vain. They accomplished so much. The recent Supreme Court decision on the Voting Rights Act, the verdict in the Zimmerman trial, the NSA spying on Americans, the erosion of reproductive rights in states all over the country—none of these diminish the accomplishments of the brave freedom fighters who went before us.

Now those freedoms have been not only imagined but lived. We have lived them and tasted them and breathed them in, made them a part of the very fabric of our being. But we have also taken them for granted. We have fallen prey to wishful thinking that those wars were fought and won once and for all, that those battles are behind us, that those freedoms are secure. Sometimes we even forget the high price that was paid for them.

We naively thought that because we ourselves had been transformed by those freedoms, so too had the rest of the country. We failed to recognize the power and determination of the untransformed, the unconverted, the recalcitrant, the small-minded and mean-spirited. We failed to recognize that although progress has been made, our lives are still permeated by systemic injustice—it poisons and plagues our every breath, every step. No one is free of it.

It's time for us to step up and build on and strengthen the progress made by the freedom fighters who came before us. Although it may seem like a heavy burden, although we may have had other plans for our lives that didn't involve struggle and sacrifice, and although it may seem that the obstacles before us are insurmountable, in actuality, this work is a privilege. It's a high and sacred calling. It is the very stuff of life to build communities and networks of activists. We march arm-in-arm with all who have fought for justice throughout history and with all who fight for justice today all over the world. Not only are we not alone, we are in mighty, illustrious company. 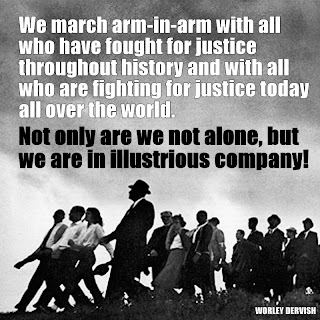 For much of my adult life, I have felt wistful that I missed the glory days of the civil rights movement. I would have given just about anything to march with the throng to Montgomery and sing with the Freedom Singers. Silly me. I didn't miss my chance. My voice, my work, my presence are needed. Now. Not only is it not too late, but now is exactly the right time.

It will never be too late to walk in the footsteps of Harry T. Moore, Rosa Parks, Dr. King, Margaret Sanger, Mahatma Gandhi, Elizabeth Cady Stanton, Nelson Mandela, and Susan B. Anthony. We still have so much to learn from them. It will never be too late to follow their example, to add our voices to theirs and our sacrifice to theirs. Not only is it not too late, but now is the time. It's our turn. The baton has been passed, and we must not fail to take hold of it. They are counting us, that mighty company, to continue their work and pay the price for freedom. Because God knows it's never free.
Posted by Unknown at 10:35 AM