Guest post by Ryan Wherley
Closing down the building singing truth to power for an hour, after consecutive weekday noon-hour Solidarity Sing Along #624, Tuesday, July 30, 2013, day #4 of the illegal mass arrests of peaceably assembled singers and sign holders. Thirty more brave heroes were arrested today, and after being taken to the Capitol basement in cuffs, were threatened that they wouldn't be processed until they stopped singing, which has become the norm.

So they did the only logical thing: they started singing and didn't stop for an hour and fifteen minutes, even though they were all still handcuffed and their songbooks had been confiscated as "evidence" of their participation in the unlawfully declared "Unlawful" Assembly.

Around 5, I ascended the wide marble steps up to the first floor and recited Article 1, Section 4, of the Wisconsin State Constitution:


The right of the people, peaceably to assemble, to consult for the common good and to petition the government, or any department thereof, shall never be abridged.

I had made the decision today to read off the names of the courageous freedom fighters who have had their rights violated and been arrested singing out for our rights over the past four days of the Crackdown, reading many names more than once. I wanted the Capitol Police and all passersby to know these are real people, with families and jobs and friends and an extraordinary amount of courage and determination.

As I progressed through the list, an amazing thing happened. As I paused after finishing up with the names of those arrested through Friday, a man who had entered the Rotunda minutes earlier and taken a seat on a bench in the outer ring along with his two children, stood up and yelled, "Heroes!!" I was taken aback, made eye contact and began to read off the list of those arrested for civil disobedience today. Bill Dunn ... "Hero!" Jerry McDonough ... "Hero!" Dennis Andersen ... "Hero!" Paul Sopko Jr. ... "Hero!" Craig Spaulding ... "Hero!" Jackson Foote ... "Hero!"

On and on it went, with him delivering the same response to each and every one of the 25 names I read off. I finished, and he slowly walked off with his kids. I will probably never know who this man was, but he left a powerful impact on me that I can never thank him enough for. I'm in tears just thinking about such an incredible moment of empowering beauty. I can only hope he realized and felt how much that meant to me ... and to the heroes by proxy. 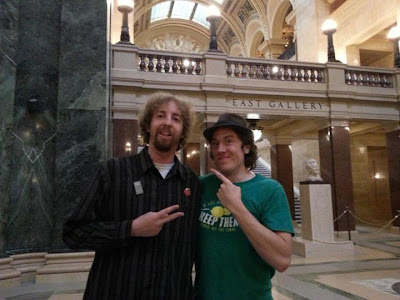 I didn't think I'd even make it through "We Shall Overcome" after I started choking up almost as soon as I began. Fortunately, I was joined almost immediately by Mary Watrud shortly after I began singing, and a young gentleman walked underneath on the ground floor, giving us a solidarity fist on his way by, which Mary and I were more than happy to return. Minutes later, he came up to us smiling from behind Fighting Bob's bust and stood beside us along the first floor balustrade.

After we finished our song, he asked if he'd be arrested if he joined in. I answered, "Not today, you're all good." How sad and telling that such a question should even have to be legitimately asked in the People's House. He asked me what part I sang and he confirmed that he was a baritone like me. We passed him a songbook and he joyously harmonized for the next 40 minutes with Mary, Gloria Marquardt, and myself, finally thanking us and going along his way during "How Can I Keep From Singing?"

Frieda Schowalter, who was arrested and forced to humiliatingly and painfully limp to the elevator after having her crutch confiscated by the Palace Guard last Thursday, joined us for "Solidarity Forever," and we left the building ringing with our voices. 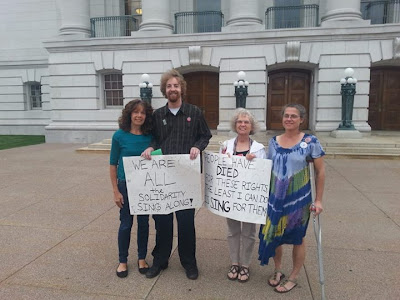 The Solidarity Sing Along will return to peaceably assemble and sing their hearts out tomorrow, brave individuals staying to risk arrest yet again in the face of fascism. Yet again, millions around the country will be singing in Solidarity with them from afar. Like clockwork, the singing will start up, the police will respond, and the proud and peaceful citizens will lift their voices to heights once deemed unfathomable just three years ago. Heroes of the day.


# # #
You can help arrestees by contributing to and taking every opportunity to share the link for the First Amendment Protection Fund. We will be needing major funds to cover the court costs for all of these arrests! Our citizens being arrested are paying a great enough price without adding a financial burden on top. Many thanks!
Posted by Unknown at 7:45 PM