A Heartfelt Thank-You to the Solidarity Sing Along


Independence Day should serve not as a blind celebration of the government, but as a moment to reflect on the central place in our history of grass-roots democracy movements, which have preserved and expanded the rights proclaimed in the opening lines of the Declaration of Independence: Life, liberty, and the pursuit of happiness.


I am enormously proud to be an American. I would say that the things that our corporate-controlled government has done at best are shameful and at worst genocidal—but there’s an incredible and a permanent culture of resistance in this country that I’m very proud to be a part of. It’s not the tradition of slave-owning founding fathers, it’s the tradition of the Frederick Douglasses, the Underground Railroads, the Chief Josephs, the Joe Hills, and the Huey P. Newtons. There’s so much to be proud of when you’re American that’s hidden from you. The incredible courage and bravery of the union organizers in the late 1800’s and early 1900’s—that’s amazing. People of get tricked into going overseas and fighting Uncle Sam’s Wall Street wars, but these are people who knew what they were fighting for here at home. I think that that’s so much more courageous and brave. 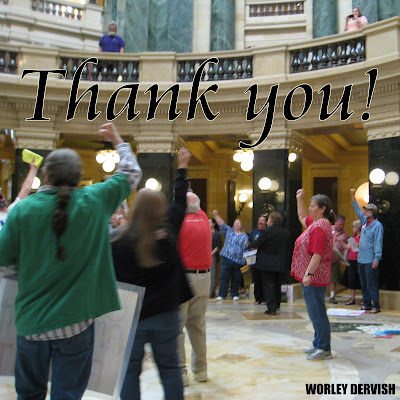 So this Independence Day, from the bottom of my heart, I want to thank the most freedom-loving, determined people I know, a community of activists I'm enormously proud to be a part of, the Solidarity Sing Along. Thank you for showing up more than 700 consecutive weekdays to sing your outrage. Thank you for singing in the bitter cold, in the pouring rain, in the blazing heat.

Thank you for coming armed with creativity and solidarity and perseverance. Thank you for not backing down, for not being intimidated, for still being there. With every fiber of my being, I thank you, not only for all that you do but for who you are. You will never know how much you inspire me, how much hope you give me, how much you have energized me and transformed my life. I will never be the same, thanks to you.


# # #
Many thanks to Rebecca Kemble for the outstanding video.
Posted by Unknown at 12:36 PM