If you haven't heard yet about what happened today in the Wisconsin State Capitol, here is a firsthand account from Giles Goat Boy on Daily Kos with lots of photos and videos. About 25 arrests were made.


People speaking for the DOA are misrepresenting the ruling to you. The judge did not say the rules are constitutional or that they have been applying them constitutionally. On p. 45 of the ruling the judge says,

"Two aspects of the Access Policy's current permitting scheme are unconstitutional: (1) the preference for cause-promoting speech in the Capitol is an unjustified, contentbased restriction; and (2) the permitting requirement for 'events' involving as few as one person is an unjustified time, place and manner restriction. The invalidity of these provisions raises the question of whether the rest of the Access Policy can be salvaged by severing or giving a limiting construction to the invalid parts." The last line of page 45 states "This is not a final Judgement of facial constitutionality."

Want to Help?
Come sing with us! If you don't want to be arrested, you can opt to leave if the Capitol Police declare an unlawful assembly. Take pictures. Witness what's happening.And if you do want to get arrested, there'll be plenty of support from an amazing community of activists. 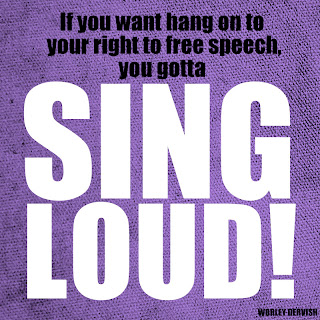 Another way to help is to donate to the First Amendment Protection Fund which goes toward defraying legal expenses. And share the link so that others know how to help too.

The reason Michael felt the need to issue the above statement is that the Wisconsin Department of Administration is misrepresenting what Judge Conley said in the injunction, and the mainstream media are just repeating whatever the DOA tells them without investigating any further. Please help us to dispel the misinformation that the DOA is generating and let people know what's happening.

In whatever way you help, please know that we are all extremely grateful. Thank you for supporting free speech in Wisconsin!