Since I heard the verdict in the George Zimmerman trial Saturday night, two Sweet Honey in the Rock songs have been going through my head over and over again. One is "Ella's Song," by Bernice Johnson Reagon. It echoes the words of civil rights activist Ella Baker, who said this in 1964:


Until the killing of black men, black mothers' sons, becomes as important to the rest of the country as the killing of a white mother's son. We who believe in freedom cannot rest until this happens.

Saturday's verdict is a body blow to every mother, every parent, everyone who ever held a child in her arms. Some were surprised by it, but many were not. The unsurprised are the ones who confront racial hostility every day, who send their black children out into the world and every day fear the worst.

We failed Trayvon, just as we failed Emmett and so many, many others. On Friday I had dinner with a precious three-year-old black boy and his family. I pray to God we don't fail him too. I fear for him, and I grieve that he must make his way through the racial morass of fear and ignorance that continues to plague us.

The other song I can't get out of my head this week is the "Ballad of Harry Moore," based on a poem written by Langston Hughes. Like Trayvon Martin, Harry Moore lost his life because of Florida's—and the U.S.'s—entrenched racism.

From Isabel Wilkerson, author of The Warmth of Other Suns:


May we never forget the history of Sanford, Florida. How could so much happen in one place? It was in Sanford that Harry T. Moore, pictured here, the NAACP's lone man in Florida and the first casualty of the modern civil rights movement, took his last breath after his home was firebombed in 1951. 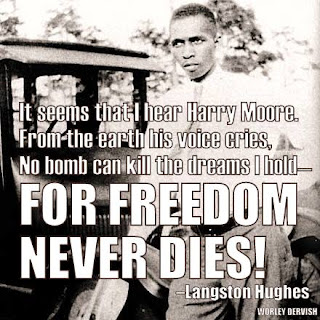 Moore, a teacher by training, risked his life in the 1930s and '40s, long before Martin Luther King and Rosa Parks came on the scene. He investigated lynchings, protested segregated schools and taught black people how to vote in a state where the NAACP was a banned organization, where, according to his biographer, "no restaurant would serve him, no motel would house him, and some gas stations wouldn't let him fill his tank, empty his bladder or even use the phone."

On Christmas night, 1951, a bomb exploded under Moore's bed at his home in Mims, Fla. It was his and his wife's 25th wedding anniversary. The closest hospital was 35 miles away—in Sanford. There was a delay in getting the couple there. Then there was a delay in getting a black doctor to attend to them. They both died in Sanford. No one spent a day in jail for their murders.

One of Moore's recruits was George Starling, a citrus picker who led strikes in the groves for better working conditions; the work was dangerous and the pay was nickels for a day's labor. It was in Sanford that Starling had a final standoff with a grove owner that set in motion plans to lynch him. He fled to New York for his life.

Decades later, it was in Sanford that 17-year-old Trayvon Martin was walking home in the rain, while being followed by George Zimmerman. Harry T. Moore and George Starling would have been deeply saddened by the Zimmerman verdict, but not surprised. The scenario, to them, would be all too familiar. History is with us always. May we learn and gather strength from it and be inspired by the courage of men like Harry T. Moore. May their sacrifices not have been in vain.