Last night in Texas we saw such impressive courage and conviction, coming not only from shero of day State Senator Wendy Davis, who exhibited extraordinary stamina and determination, but also her colleagues, particularly State Senator Leticia Van de Putte, who left her father's funeral to be at the capitol. When acting Senate President Lt. Gov. David Dewhurst repeatedly ignored Van de Putte while recognizing other senators, she finally queried, "At what point must a female senator raise her hand, or her voice, to be heard over the male colleagues in the room?" 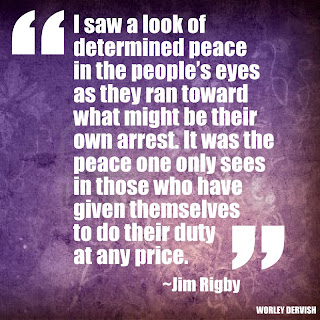 But the real heroes of the evening were the people of Texas, who finished Senator Davis's filibuster with one of their own, raising such a roar that they interrupted the proceedings on the floor. Republicans tried to alter the clock, and the AP even reported that the bill had passed, but in the end Republicans had to concede that the vote had not taken place before midnight, as required.

From Texas blogger, Presbyterian minister, and activist Jim Rigby, who was there last night:


After the Republicans appeared to have won the day and passed a bill that added a horrible burden on poor rural women seeking reproductive healthcare, as soon as it became clear that the Republicans were going to make up the rules as they went along, including a final dirty trick of letting the bill pass after time had expired, it was clear that the women of Texas had had enough. ...

At the time, I could not make out what people were saying, but the men were chanting a refrain and the women were answering. It turns out the chant began with the men asking, "Whose house is it?" and the women responding in deafening thunder, "Our house!" Through the early years of this movement in Texas I always expected to be one of a handful of men at such a gatherings. My eyes filled with tears as I realized those days are over. The women of Texas have found their beautiful angry voice and the men of Texas have their back. We have all begun to realize that reproductive choice isn't just a woman’s issue. It is a human rights issue as basic as any other. 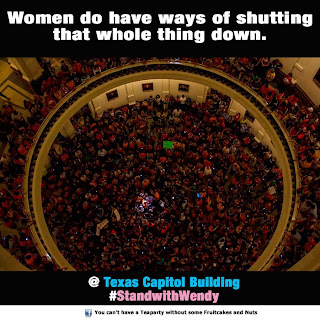 Today I am cheering for Texas State Senators Wendy Davis and Leticia Van de Putte and all the women of Texas and the men who stand with them. Thank you for not letting them shut you down or shut you up.


# # #
Many thanks to You can't have a Tea Party without some Fruitcakes and Nuts for the shutting-that-whole-thing-down meme!
Posted by Unknown at 2:14 PM