The Wisconsin State Senate today passed a bill requiring that Wisconsin women seeking an abortion undergo a medically unnecessary ultrasound procedure, after which the physician must give an account of the number of “unborn children” present, the characteristics, dimensions, and location in the womb. Because, of course, women are too ignorant to know “what they’re carrying in their womb and what they’re doing” unless it's rammed down their throats. Senator Mary Lazich (R) has proclaimed that “it’s time for women to know the facts.” Because how could we possibly “know the facts” about what’s happening in our own bodies without her and her Republican colleagues forcing them on us?

Senator Kathleen Vinehout (D) pointed out that not a single one of the constituents in her district asked for this bill or expressed support for it. She related the concerns of a couple of her constituents, one of whom pointed out that only 16 percent of rapes are reported, that one in six women in the U.S. will at some point in their life experience rape, and that that comes to more than 400,000 Wisconsin women.

Senator Lazich dismissed Sen. Vinehout’s “theatrics” (before proceeding with her own) by pointing out that the bill exempts rape and incest. Does it also exempt unreported rapes? Because those are the rapes Sen. Vinehout was referring to. In case you forgot, that’s 84 percent of rapes.

Here’s how it went down:


For those who don’t have the stomach to watch the video (and believe me, I don’t blame you one bit—watching it over and over again to get all the juicy quotes was truly nauseating), let me describe to you the “very cold, cold procedure and what happened, and the cold environment” in which democracy was dealt yet another death blow in Wisconsin.

Your voice and the voices of many of your legislative representatives were dismissed and discounted. After Senator Lazich’s animated testimony, Democratic senators tried to continue, but they were silenced. Senate President Mike Ellis came completely unhinged and shouted while slamming down his gavel so hard that it broke: “You’re out of order! Sit down! You’re not recognized! The question before the house is nondebatable. Call the roll!” 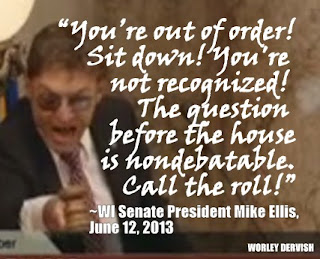 So that’s how democracy dies in Wisconsin. At least it was with some drama and the perfect symbolism of a broken gavel. And once this bill passes, we will have to live with it “day after day after day after day” for the rest of our lives. The women of Wisconsin will have to “live with this trauma” of having our voices silenced, of having our knowledge and judgment questioned, of having unnecessary medical procedures forced upon us by a legislature that refuses to hear our voices or even consider our concerns. “And it’s time for that to end.”

It’s time for those whom Senator Lazich and Senator Ellis purport to represent to know the facts about how their senators are carrying on in the state capitol in their name and what they’re doing when they reelect these legislative bullies over and over again. “If you have a loved one that’s thinking about” voting Republican, “for crying out loud, you want them to have full information. ... You want them to know what’s going on” in that legislative body and “what they’re doing and that they’re not going to be able to change that for the rest of their life. They make that decision. It’s over. It’s over in a few minutes, and then later on they can live with the fact that" with that one decision in the voting booth, they supported the death of democracy in Wisconsin.
Posted by Unknown at 6:54 PM