I'm so jazzed about Leroy Butler coming to speak at St. Dunstan's Episcopal Church (6205 University Avenue, Madison, WI 53705) on June 30 (12:30pm). Mr. Butler is catching a lot of flack just because he congratulated Jason Collins via Twitter on his coming out more than a month ago. This story was on the front page of today's State Journal, "Beloved Packer LeRoy Butler lands amid ugliness of culture wars."

“I’m getting gay-bashed and I’m not even gay,” Butler, 44, said in an interview. “I didn’t know that so many people hated gay people. I knew they didn’t approve of the lifestyle, but to hate them?”

Butler said he’s still getting 10 to 15 hate-filled messages a day. “The f-word, the n-word, you name it, and all I did was congratulate a young man for coming out,” Butler said. 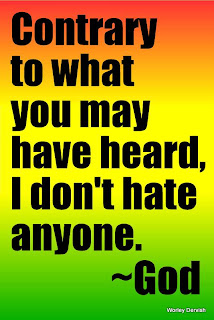 Congratulations to St. Dunstan's for stepping up when another church cancelled Butler's speaking engagement because of his tweeted support for Collins. I rejoice that Christians who are supportive and welcoming of our LGBTQ sisters and brothers are becoming bolder and more outspoken in their support. I'm sick at heart when those who hate in Jesus' name are the de facto spokespersons for the church. Fortunately, that's changing. The progressive church is finding its voice, and it's the voice of love and welcome and inclusion. Hallelujah!

St. Dunstan's has managed to raise about half of Butler's speaking fee. If you'd like to help out, click on the "Donate" button on the St. Dunstan's website.
Posted by Unknown at 5:12 PM