The Outsiders of North Carolina

Like many of you, I have been paying close attention to the weekly actions in Raleigh, North Carolina, known as Moral Mondays. (The link is to their Facebook page. Please go give them a "Like" to express your support.)

Moral Mondays participants in Raleigh are protesting the same ALEC agenda that is plaguing us here in Wisconsin: voter suppression, refusal of federal funds to expand Medicaid in the state, and an onslaught of anti-family, anti-worker, anti-woman, anti-education, anti-democracy legislation, along with a proclivity for plunder and corruption. North Carolina governor Pat McCrory proclaimed this weekend that he wouldn't back down on the ALEC agenda. Just like his pal Walker, McCrory claims that "outsiders are coming in and they're going to try to do to us what they did to Scott Walker in Wisconsin."

So what does it take to be an insider in Wisconsin and North Carolina? Well, naturally, you have to be a $upporter of the governor, regardless of where you're from. So the cash that poured in for the campaigns of both governors from all over the country? That wasn't outside cash, because by definition $upporters are insiders. Whereas you rabble who have the nerve to voice your objections to the ALEC agenda, you are the essence of outsiders, even those of you who were born in the state and have lived there all your lives. 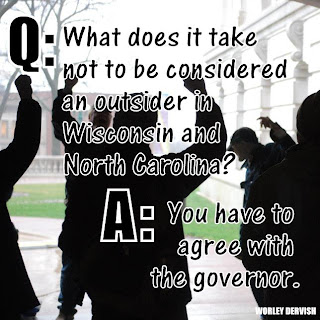 As a Wisconsin outsider, I'd like to take this opportunity to express solidarity with the outsiders of North Carolina for raising their voices, for putting themselves on the line for the sake of justice and democracy, for being willing to be arrested.

Melissa Harris-Perry has this to say to Governor McCrory:


If you thought you had your hands full with "Moral Mondays"—get ready for "Witness Wednesdays." You may want the protesters to go away governor, but they are just getting started. And so are we.

Here is the Madison Song Circle singing "Forward Together," which was written in honor of the Moral Mondays protesters in North Carolina and is sung regularly by the Solidarity Sing Along in the Wisconsin State Capitol.