Paying the Price for Free Speech

I have half-joked for decades that one of the items on my bucket list is to be arrested for civil disobedience. The civil rights movement and the anti-war protests happened while I was safely ensconced in junior high and high school. I got to college in time to see one lone streaker torpedo across campus. There I was, already a dyed-in-the-wool folkie, just in time to wave the glory days of folk music good-bye. I felt cheated.

Hah! Little did I know that my timing was not so bad after all. Here I am—yes, a little worn around the edges—smack-dab in the middle of the Wisconsin Uprising, singing my heart out with the Solidarity Sing Along as many times a week as I can. There are some days I can feel the resonance so strongly that I begin to suspect that this is the moment I was born for and have been preparing for since those disappointingly quiet days in college.


The Solidarity Sing Along 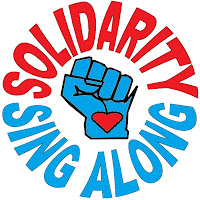 began the day after an illegal vote was taken in the Wisconsin State Senate to pass a bill destroying the rights of working people. Participants in the spontaneous event understood that their voices were no longer being heard or acknowledged through the formal political structures of the state. They were determined to not be silenced, however, and have continued to voice their opinions on the political issues of the day every single weekday for nearly eighteen months. —Rebecca Kemble, The Progressive Magazine

And now there's serious trouble afoot. The new chief of the Capitol Police, David Erwin, is cracking down on free speech in the Capitol. Twelve practitioners of free speech have been arrested arrests have been made so far for holding signs without a permit.

So Friday, Sept. 7, at noon we're singing, again, for free speech, for our friends who have been arrested and fined, for our rights and yours, for the rights of our children. We're singing because freedom of speech is absolutely fundamental to democracy. Without it we are no more than cogs in the machine—no voice, no power, no access.


An unjust law is itself a species of violence. Arrest for its breach is more so. —Mahatma Gandhi

Most of us will likely gather inside the rotunda, but a few may also gather outside under the tree on Carroll Street (south of the Lady Forward statue) as we have done on Fridays since June. Please come join us! Bring a friend! We're asking for as much participation from our friends and fellow citizens as possible. Free speech needs you.


Attorneys affiliated with the Madison National Lawyers Guild stand ready to defend anyone who suffers arrest as the result of over-zealous enforcement of the Capitol access policy. Anyone who does suffer such an arrest should not argue with officers or even converse with them about their protest actions. Instead, protesters should do nothing more than ask officers why they are being arrested, ask what the charges are, immediately demand to speak to an attorney, and, if arraigned, plead not guilty. If possible, the protesters should notify someone who is not being arrested that they are being placed in custody so that this individual can contact the protest coordinator of the Madison National Lawyers Guild at 608-352-0138. The coordinator will then attempt to find legal representation for the person who has been arrested. —Madison chapter of the National Lawyers Guild

As you did in February and March last year, come prepared to resist provocation and intimidation peaceably. It's critically important to our cause that our conduct be above reproach.


When it gets down to having to use violence, then you are playing the system's game. The establishment will irritate you: pull your beard, flick your face to make you fight. Because once they've got you violent, then they know how to handle you. The only thing they don't know how to handle is non-violence and humor." —John Lennon 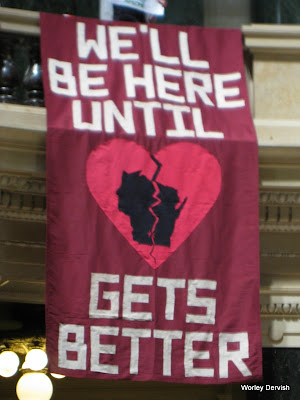 We're also hoping for a large turnout on Monday. And we'll continue every weekday at noon until Wisconsin gets better. (For news on whether we're singing inside or out, check the Solidarity Sing Along Facebook page). We're in this for the long haul. We're not going away.


We are gentle, angry people, and we are singing, singing for our lives. —Holly Near