Thanks to Chief Erwin and his saber rattling, more than two hundred sign-wielding singers showed up today to sing in the People's House.

As we have often done, we began by reading Article 1, Section 4, of the Wisconsin state constitution: 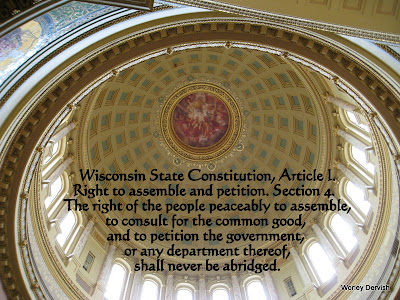 State Rep. Chris Taylor showed up and told us that she met with Chief Erwin and someone from the Department of Administration this morning. After they refused to give her specific information on what behavior is and isn't acceptable in the Capitol building, they walked out of the meeting.

Rep. Peter Barca today posted a letter Rep. Taylor sent to Chief Erwin after the meeting regarding her still-unanswered questions:


When I asked about the specific conditions you were considering in determining whether an individual needed a permit or when making an arrest, you stated that these determinations were being made on a “case-by-case basis” and refused to articulate specific factors that would be considered. Instead, you and Ms. Coomer [from the DOA] recommended that anyone considering holding a sign call the Capitol police to inquire whether a permit would be needed. This gives me grave concern that the public is not being provided adequate notice about what conduct you are prohibiting and under what specific legal authority you are acting. Further, this subjective manner of making permitting and arrest determinations can easily lead to abuse, with the result being that constitutionally protected political speech is being improperly silenced.


Rep. Taylor also expressed gratitude that there are still courts that will act to protect citizens' freedom of speech. She held up a copy of this week's court ruling by Dane County Judge Frank Remington stating that § Adm. 2.07(2), prohibiting displays (under which the recent citations were issued), doesn't apply to handheld signs, but rather only to freestanding exhibits. 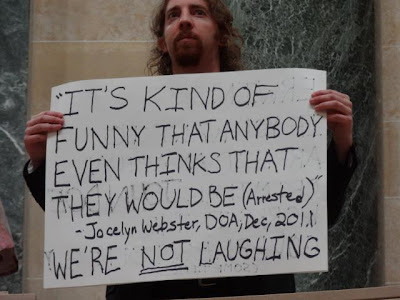 Photo by Karen Kinsley
The atmosphere today was boisterous and jovial—it's always great to see so many of our friends gathered together in the People's House. But there was also a serious side to our signs and our singing and our presence. We highly value our right to free speech, and we're willing to defend it when it's threatened. The Capitol police have a duty to uphold the law, the law that guarantees that "the right of the people peaceably to assemble, to consult for the common good, to petition the government, or any department thereof, shall never be abridged." 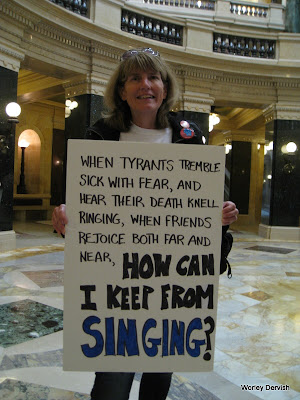 So thank you again, Chief Erwin, for providing us with this occasion to sing with our friends in the People's House, for reminding us of how precious our rights to free speech and free assembly are. Thank you for the opportunity to remind you, Governor Walker, and the people of Wisconsin that we're still here. We're still exercising our right to free speech, assembly, and petition. And we're not going away anytime soon.

# # #
Don't miss the Progressive's take on today's triumphant sing along.
Posted by Unknown at 5:03 PM