Erwin's Campaign of Intimidation: It's Not Working!

I'm waiting for my doorbell to ring. My camera battery is all charged up, and the camera is sitting by the front door, just in case I should need to videotape anyone who happens to pay me a visit.

Yesterday I went to the Wisconsin State Capitol at noon for the Solidarity Sing Along, as I frequently do. There were a good number of us there, all of them my friends. (If you've been to the Solidarity Sing Along, then you're a friend of mine, to put a little twist on one of my favorite songs.) Lisa and Jason were there, as were Brandon and Bart, along with sixty or so others, all doing pretty much the same thing for an hour: holding signs and singing our lefty liberal bleeding hearts out.

Yesterday afternoon, three hours and twenty minutes after the Sing Along ended, the Capitol police showed up at Lisa and Jason's house and issued them both two citations for obstructing access and holding signs over a railing in the Capitol. About an hour later, Brandon was stopped as he was walking through the Capitol. Apparently, the Capitol Police had paid him a visit at home too, but he wasn't there. How lucky for them that he just happened to be passing through! He was brought downstairs to the Capitol Police Station, where he was issued a citation.

According to Dane101, Tuesday morning the Capitol Police showed up at Bart's workplace to issue him two citations for obstructing access and for holding a sign in the Capitol the previous day.

What the heck? People's homes and workplaces? Really, Chief Erwin? Last week citations were issued johnny-on-the-spot by ten or so officers, replete with handcuffs, in the People's House, in full view of witnesses and cameras. Apparently that didn't quite do the trick for Chief Erwin. So this week, the Capitol Police ranged beyond their usual bounds—in several respects—going after people at their homes and workplaces.


Twelve News asked the new police chief why no one was arrested Friday after two days of enforcement. He said it's a matter of resources. "We went right into protection mode, safety, preserve the peace, and that's what we moved into. Sometimes we do enforcement, and sometimes we just protect and serve. That's what we did today." Chief Erwin says no one should draw a conclusion that they won't make more arrests in the future. —WISN Milwaukee, emphasis added

Why go to all this effort to issue a few measly citations, going to people's homes and places of work? What point is Chief Erwin trying to make? God knows I'm not drawing parallels here, just noting some similarity (with apologies to St. Matthew): "Every day we stood in the Capitol Rotunda singing, and you did not arrest us." Is he too ashamed to issue these nefarious citations in the full light of day?

Chief Erwin, if you're worried about publicity, you should be. The whole world is watching what happens in the great state of Wisconsin. To get your shiny new job, did you make the mistake of promising your boss that you could rid the Capitol of our daily presence? If that's what you're on about, it's not working. After yesterday's news of four more citations being issued and visits paid to participants' homes, more than 140 showed up to help safeguard free speech in the People's House, more than twice as many as yesterday. As my friends are fond of saying, "Screw us and we multiply." 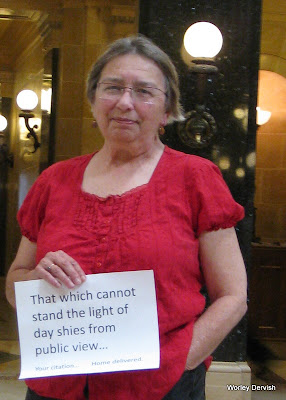 Today, the Madison Chapter of the National Lawyers Guild issued another press release:


The Madison, Wisconsin chapter of the National Lawyers’ Guild (NLG) condemns the Capitol Police’s continuing arrests of citizens at the Wisconsin State Capitol. After the rule used by police to arrest people last week was interpreted not to include holding signs in a circuit court case, police today cited protesters for draping banners over railings inside the capitol rotunda and holding an illegal rally without a permit, although these activities have been going on for months without incident. It has become impossible to tell what conduct is allowed or prohibited in the Capitol Rotunda, and repeated arrests of select individuals are designed to stifle dissent against state policies, say Guild members.

Your bullying, Chief Erwin, isn't working. We're holding our ground, right there in the People's House, because we're sure of our rights under the U.S. and Wisconsin state constitutions. Our permit is safely ensconced under glass on the first floor of the Rotunda. And we're not just safeguarding the free speech of lefty liberals. Whenever other groups have scheduled events at noon on weekdays in the Capitol, we have moved the Sing Along outside. We are happy to share. We freely and gratefully acknowledge that the People's House belongs to all the people of Wisconsin.

Chief Erwin, your palace guard may come pay us a visit, but don't expect us to open the door unless we have a video camera running, because we know a lot of people who are very interested in what you're up to. Even right here at my doorstep, the whole world is still watching!
Posted by Unknown at 5:48 PM