"What Were You Arrested For, Kid?"

I shake my head every time I think of Wisconsin Capitol Police Chief Erwin's heavy-handed crackdown on the singing citizens in the Capitol. Before Erwin began arbitrarily handing out citations, we were a small, stalwart, ragtag bunch. I couldn't make it every weekday, so for a while I came once a week; then when my schedule eased up a bit, I came two or three times a week.

My main motivation was to bolster my resolve in light of the disheartening results of the recall. Especially for the months of June and July, I felt like if I didn't keep singing, I might succumb to a full-blown case of political malaise and election fatigue. Every time we sang Holly Near's "We Are Gentle, Angry People," I knew that in truth we were singing for our lives, for our hearts to be uplifted, for our courage and resolve to return, for our focus to shift to new ways of resisting the Walker regime.

Enter newbie Chief "The-military-prepares-you-to-be-a-great-leader" Erwin and his crackdown. The right-wing Wisconsin Reporter quoted him on September 10, the day before the eleventh anniversary of the 9/11 attacks: "And so we have a group of people that come here, and last week they were holding signs and they are part of this group that, for lack of a better word, are terrorizing people at this Capitol."

"Terrorizing people"? Really? Chief Erwin, we're holding signs and banners and singing. And you call that "terrorizing"? It's a pity you lack a better word. We'd be happy to supply you with a few: citizens, constituents, Wisconsinites, singers.


We have been watching with alarm the recent developments at the Wisconsin State Capitol. In recent weeks, the Department of Administration (DOA) and the leadership within the Capitol Police have commenced enforcement action against peaceful protesters coming to the Capitol. Officers have been ordered to arrest and cite protesters whose only offense is the silent carrying of a sign. Other protesters have been cited for gathering for the “Solidarity Sing-along,” a non-violent group of citizens who sing every day over the noon hour. The Solidarity Singers have been particularly cognizant of the needs of other groups who also want to utilize the Capitol, and frequently relocate outside the Capitol to be respectful of those needs. They are now being cited for assembly at the Capitol without a permit.

Today Chief Erwin whined his response: "It's unfortunate that these associations would issue a statement about Capitol Police actions without ever contacting us. Our officers would never judge another police department’s enforcement without knowing the facts of the situation."

It's difficult to feel much sympathy if Chief Erwin believes his voice isn't being heard and his input isn't being sought. One of the singing citizens posted this today on Facebook in response to Erwin's complaint:

"It's unfortunate that the new Chief would issue multiple statements about Citizen actions without ever contacting one of them (and ignoring multiple Citizen requests to meet with him). These Citizens would never judge any Capitol Police officer, including the Chief, except by their words and actions towards us. The facts in the present situation are beyond dispute. He is a complete asshole. Complete."

Well now, I have to confess, I'm still grateful to the chief for revitalizing our daily citizen sing along. Whereas before I was content to show up two or three days a week to console myself with song, now I can't bear to miss a day of singing for free speech in the land of the free. My hackles are up. "You can stand me up at the gates of hell, but I won't back down." 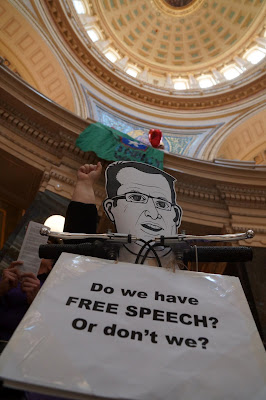 What you see here is an up-close look at the sign on the front of my scoot, along with my Chief Erwin mask, and my fist raised in solidarity. Above that is a heart balloon that was released accidentally today. The offender has already received a citation for an unpermitted "Display and Decoration (Release of balloon)" 2.07(2). Two Capitol Police officers were kind enough to deliver the citations in person to the woman's home. Photo by Leslie Amsterdam

1. Donate to the Legal Defense Fund (hosted by the Madison Infoshop), which since 1997 has been used to support those who have had their rights violated. Checks can be made to "Legal Defense Fund," c/o Madison Infoshop, 1019 Williamson St. #B, Madison WI 53703. Please put "Capitol Protest" in the memo line. For more information, call 608-262-9036.

2. Join us on Friday from 5 to 6pm on the steps of the Dane County Courthouse for the Capitol Citation Speak-Out and Fundraiser Rally. The rally will feature speakers from the ACLU of Wisconsin and the National Lawyers Guild. We also hope to hear from some of those who were unconstitutionally cited and, of course, you, should you choose to make your voice heard!

I continue to wait for the knock on the door and look for a registered letter containing a pink citation or two in the mail. So far, nothing—even though I have done the same as my friends who have been arrested, cited, and chased down in the Capitol, at home, and at work.