Update: Rally at 4:30pm Monday, not at 1pm, as previously announced.

I don't know about you but I've had enough. I've had enough of the venomous anti-woman agenda of the Republican party, the leadership of which is more concerned about proving to the right-wing extremists controlling their party that they're really as anti-abortion as it's possible to be. It's ridiculous to call them "pro-life" because they oppose abortion even to save a woman's life. I don't know what that is, but it sure as hell isn't "pro-life." It comes closer to pro-death.

The Republican anti-woman agenda includes denying women equal pay for equal work, aggressively going after Planned Parenthood and other women's health care providers, outlawing abortion, and limiting access to contraceptives. Now all are agape at Todd Akin's supposed slip, in which he says exactly what he means, reiterating the right-wing fantasy that in cases of "legitimate" rape a woman has the magical power to "shut the whole thing down" and prevent pregnancy. The obvious implication is that if you get pregnant from rape, it isn't a "legitimate" rape. Whatever the hell that is.

Since then, Akin and every Republican running for office across the land have fallen all over themselves trying to back away from Akin's callous remarks and what they reveal: the party's deep-seated contempt for women. That's what this is really all about. Women, who apparently lie about rape and are prone to hysteria, cannot be trusted to make decisions about their own bodies.

This message is brought to you by the toxic rape culture in which we live. The message is precisely the same as that of every rapist: "You don't get to decide what happens to your own body. I do."

In 1971, the U.S. Congress designated August 26 of each year as "Women's Equality Day." Eager as we are to acknowledge all that our foremothers accomplished, we also recognize that we have a lot more work to do to gain women full equality and the respect they deserve. 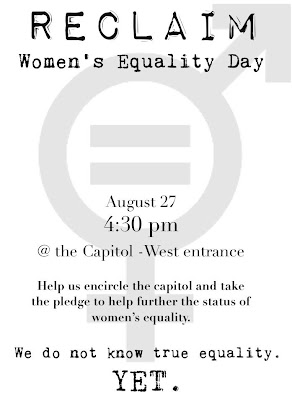 On Monday, August 27, at 1pm 4:30pm, all of you women and the men who support you, join us on the west side of the Wisconsin State capitol in Madison for "Reclaim Women's Equality Day." After we gather, we'll encircle the capitol in a live demonstration of our commitment to continue the work of our foremothers in ensuring women's equality.

You members of the misogynist party, we're putting you on notice. We're fired up, and we're not gonna take it anymore!


Update! Update! Update!
The time of the Reclaim Women's Equality Day rally has been changed to 4:30pm on Monday. Please help spread the word!
Posted by Unknown at 5:09 PM