Advertisements insidiously worm their way into our hearts and minds despite our best efforts to tune them out (which is why Tom and I don't watch TV anymore). They must be accomplishing something, or advertisers wouldn't shell out the big bucks for them, would they?

But isn't there some kind of saturation point? Aren't we getting to a place where people are just sick to death of always having stuff hawked and pushed at them? Does anyone else ever feel like you spend your whole goddamn life in a marketplace, with sellers screeching at you nonstop?

This must be why younger people are known to be a more susceptible "market." (They're human beings—not a market!) They haven't yet reached their saturation point. 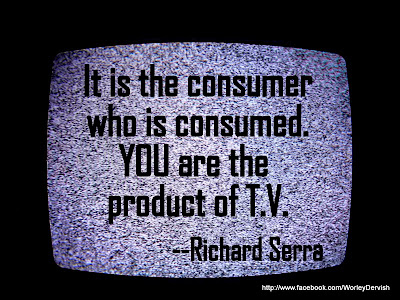 I just have to say shout this: I am not a consumer! I am a human being! I am not a market! I'm a person!

Capitalism is all well and good to a point, but could we put some boundaries around it so that not every goddamn thing in life is first and foremost a money-making opportunity? There are many arenas in life that are not appropriate for capitalist meddling. Prisons. Health care. Education. Military. This shouldn't be so very hard to grasp, but the folks currently holding the reins—that would be the corporate 1%—don't have the first clue.

How can we have a prison system that makes more money when there are more prisoners? The system has a vested interest in putting more people in jail. How can that possibly work in the cause of justice?

How can we have a health care system that makes more money when people are sick? Or that turns away those who are sick because they are unprofitable? The system has a vested interest in people being ill and needing more "care," provided they have the means to pay for it. How can that possibly work in the cause of health?

How can we have an education system that makes money off of our children's future? The system has a vested interest in enrolling as many children as possible and churning out cookie-cutter automatons ready to be fed into the corporate profit machine. How can that possibly work in the cause of education?

How can we have a military system that makes more money when we are at war? The system has a vested interest in devastating parts of the planet where other profit makers plan to establish more "profit centers." How can that possibly work in the cause of peace?

The same can be said of journalism. How can we have "news" sources whose sole purpose is to make money? The system has a vested interest in not offending its corporate sponsors. How can that possibly work in the cause of truth?

And public transportation. Our poor beleaguered planet is begging us to figure out how to wean ourselves off of fossil fuels. Is this really so beyond us? Yes, doing so will cause some disruption for those whose livelihoods come from fossil fuels. But won't the solutions also provide livelihoods? And can we not assist those working in a harmful industry to transition to a less harmful one? 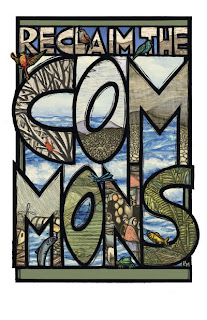 The fact is that we have allowed capitalism to run amok, to the point that it has metastasized. It has invaded area after area where it doesn't belong. It needs to be excised before it completely cuts off our vital organs and reduces us to a neofeudal machine in which the only acknowledged "good" is profit, that is, profit for the very few. Walmart wages and Walmart living for the rest of us. That would be hell on earth, and that is precisely where we're heading.

Is there anything wrong with ordering our common life for the common good, rather than for the profit of the very, very few? Could we not declare some areas of life off-limits to the profit makers? This is not a new or radical or alien idea. The ordering of the lives of all for the profit of a very few isn't a new idea either. It's been called many things: feudalism, plutocracy, fascism, to name a few. And we've seen how those have worked out—not well at all.

It's time to choose, time to get busy and root out the sanctified greed that is causing the rapid deterioration of our common life. Time for all of us to pitch in and push, not for what will benefit only you and yours (or more accurately, them and theirs, as in the 1%). Rather it's time we all worked for what will benefit the human family. It's time to roll up our collective sleeves, work together tirelessly and joyously to restore the common good. It's time to reclaim the commons.


# # #
Many thanks to Ricardo Levins Morales for the Reclaim the Commons poster.
Posted by Unknown at 6:43 PM