In the 2010 election, the people of Wisconsin were looking for fiscal responsibility in tough economic times. When they voted for Walker, they thought they were voting for a conservative, someone who would conserve the hard-earned money paid by Wisconsin's taxpayers. These aren't radical people. They're hard-working, fair-minded, supremely reasonable, unwaveringly responsible people. And many of them are waking up to the fact that they aren't getting what they thought they were voting for in 2010. 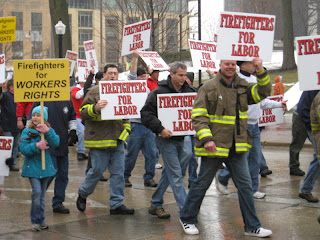 Many of us know that the public employees of Wisconsin and their unions are not to blame for any fiscal difficulties the state government may have. Many realize that public employees have already paid their share with "negative pay raises" (I kid you not!) and "austerity measures." And many are very proud of Wisconsin's proud heritage of championing the rights of working people.
One protester I encountered on the Capitol square last Saturday voted for Walker because he ran on a platform of balancing the budget, not one of busting the unions. She was dismayed and felt betrayed by what she felt to be Walker's bait-and-switch tactics.
Earlier this week, Dave McClurg, a police officer in Madison and the vice president of the Madison Professional Police Officers Association, told of his own disillusionment, not only with the state Republicans, but also with Fox News, Limbaugh, and O'Reilly:

My name is Dave McClurg. I'm a City of Madison police officer. I've been here, working it, working this rally. I've been to the Capitol on my off time, coming here and protesting.
For years I've been a conservative Republican. I voted for Bush during that time. I have seen ongoing the lies that Fox News and that others are saying about what's going on here. My entire time here as both a police officer and a protester, what I've seen is nothing but peaceful protests, and it sickens me, the fact that none of the Republicans as part of our government in Wisconsin can see what's going on and change their minds. I, for the first time in my life, the other day donated money to the Democratic Party.
I will never vote Republican again. From the lies that I've seen and from the talking heads out there that I used to follow--Limbaugh, O'Reilly--I'm disgusted by the rhetoric you're throwing out there and that you can't see what is going on today and the power that the people have. We are not lazy. We are not bloodsuckers. We are hard-working Americans, and we won't put up with this. (emphasis added)

(You can see the video of McClurg's statement here.)
People like McClurg are discovering to their horror that Walker is anything but conservative. He's a John Birch demagogue willing to throw the people of Wisconsin under the bus to benefit his corporate benefactors. And by his bullying and his refusal to compromise or even listen to the people of Wisconsin, he is making no secret of the fact that he holds these good people who elected him in utter contempt.
In a conversation with a blogger posing as David Koch, Walker says of the protesters, "Hey, this is Madison. It's full of '60s liberals. Let 'em protest all they want." Apparently he doesn't get it that people who voted for him are among the protesters. According to the Milwaukee Journal-Sentinel, State Senator Jon Erpenbach, one of Wisconsin's Fighting 14, said that "the real story is the total lack of compassion (from Walker) over what's going on in Wisconsin. ... Walker's remarks characterizing the protesters as 'a bunch of '60s liberals' shows how out of touch he is on the breadth and depth of concern across Wisconsin to the governor's union rights rollback proposal."
A letter to the editor of Madison's CapTimes recalls FDR's fireside chat on Sept. 6, 1936:

There are those who fail to read both the signs of the times and American history. They would try to refuse the worker any effective power to bargain collectively, to earn a decent livelihood and to acquire security. It is those shortsighted ones, not labor, who threaten this country with that class dissension which in other countries has led to dictatorship and establishment of fear and hatred as the dominant emotions in human life.

Walker, his billionaire backers, and his Republican cronies in the state legislature are failing to read the signs of the times and clearly have failed their American history. Worse yet, they're failing the people who voted for them. Their arrogance and their contempt for the people of Wisconsin will be their undoing.
Posted by Unknown at 9:43 AM