The events unfolding this past week here in Wisconsin are even more amazing than most people realize. This is a bubbling cauldron of democracy versus plutocracy (or oligarchy, as Paul Krugman calls it, although I still think plutocracy is more apt). It is a roiling torrent of heavy-handed power grab versus groundswell of popular opposition. We are in the process here of holding back what we can of the flood that is decimating the middle class. It's as if the people of Wisconsin are all holding their finger in the dike. Let's hope they continue to stand firm.
Fortunately, the people of Wisconsin are not without their heroes: Wisconsin's Fighting 14—Mark Miller (my state senator), Tim Carpenter, Spencer Coggs, Tim Cullen, Jon Erpenbach, Dave Hansen, Jim Holperin, Robert Jauch, Chris Larson, Julie Lassa, Fred Risser, Lena Taylor, Kathleen Vinehout, and Robert Wirch—walked out of the senate on Thursday to prevent there being a quorum, thereby making it impossible for the senate to vote on Walker's so-called budget repair bill. If it weren't for the Fighting 14, the bill would already have been passed.
And we have yet more heroes, these in the State Assembly. It is something of a puzzle to me that I haven't seen or heard more about this in the media. I thought media outlets were looking for high drama, and if this isn't high drama, I don't know what is. Thanks to the Wisconsin Eye, I was fortunate enough to see this drama unfold live on Friday afternoon as it was broadcast from the State Assembly floor.
The Assembly was set to begin at 5:00pm. But unaccountably the roll call begins at 4:55pm. For some strange reason, the Republicans are present and accounted for, but the other side of the aisle is strikingly empty. Still, at 4:57 the Assembly actually votes on and passes two amendments. At 4:58 the Democrats, all wearing their orange tee-shirts proclaiming their support of the public employees protesting the bill, begin running into the chamber, Representative Gordon Hintz (Oshkosh) the first among them. As Hintz is requesting to be heard, and over the shouts of the Democrats running into the chamber, the Assembly votes on and passes the bill itself. 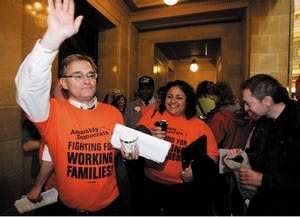