A Warning from the Universe

Years ago when I was in Amsterdam, many days I walked past a bridge with a huge sign on it, in English, that read "Abuse of power comes as no surprise." Much later I learned that it was a work by American conceptual artist Jenny Holzer. To me, that message seemed like a warning from the universe, and maybe it was. Every day I walked past it, it burrowed a little deeper into my consciousness and stayed there, ready for the day when I began paying attention to how power is used and abused.

Hardly a day has gone by, these past eight long years, when I have not thought about that warning. Driven by the ideology of the "unitary executive," the Bushies used the unending, ill-defined "war on terror" to amass more power than any administration in U.S. history. The founders of this country would have recognized the abuse of power for what it is, they would have been utterly horrified, and they would have known that loud, persistent, fierce dissent was the only antidote. 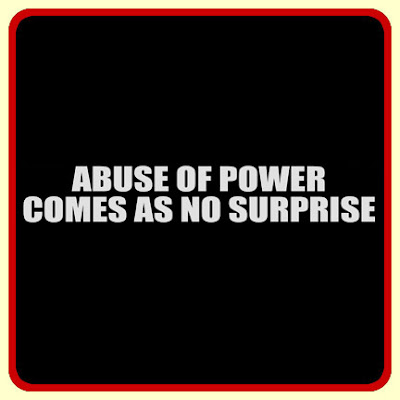 In my darker moments I have feared that, drunk with so much power, the Bushies would find some cataclysmic reason to assert that the transition to a new administration is too dangerous in these perilous times, that they would impose martial law and retain power, undoubtedly in the interest of national security. For the first time ever, we have standing troops in this country ready to intervene in the case of public unrest. I don't think I'm being paranoid here. I will breathe freely -- in every sense of the word -- when Dubya and Dick finally step down. Until then, I'm on edge. I don't trust them for a millisecond. Or, actually, I do trust them -- to subvert the rule of law and abuse their power to whatever extent they can.

In spite of my fears, it looks like the transition will indeed take place and that there will again be a peaceful transfer of power in the United States. The president-elect holds much promise; he is very popular, well liked, widely admired -- and rightly so. He has given us permission to hope for progress toward the ideals we cherish: liberty, justice, equity, peace, the rule of law, to name only a few.

The moment they assume office, Barack Obama and his administration will face crises and disasters and abuses on nearly every front. But these are not their only challenges. Obama is about to step into the most politically powerful role on this planet, his predecessor having substantially expanded the powers of the office. It is extremely rare for leaders to scale back their own power, but that is exactly what Mr. Obama must do. He must return this country to the rule of law, whether he himself would be a tyrant or not. He must unflinchingly demonstrate that no one--not even the president, and perhaps especially not the president--is above the law. He must work to restore the checks and balances of our government.

Of course, Congress must work with him toward this goal. And, most important, we the people must also. We must work to restore and defend the rule of law and the Constitution and to guard against abuses of power and the rule of tyrants. We put the fox in charge of the hen house when we let Dubya assume the presidency, a disastrous error that will take many, many years to remedy. By being alert and ready, by participating and raising our voices, we will do much to rectify all that has gone wrong in the last long eight years.

Our rights, our civil liberties, and the rule of law are not to be compromised under any circumstances. The founders of this country knew how precious and fragile liberty is, and many of them gave their lives for it. We can do nothing less than dedicate ourselves to restoring what has been lost and guarding it vigilantly until our last breath.
Posted by Unknown at 11:50 AM