The Auto Bailout and a Tale of Three Cars

Here are some strings I would like to attach to the auto bailout. Instead of insisting that GM and Chrysler dramatically reduce their debt and lower workers’ salaries, let’s insist that they make cars people actually want. No amount of bailout money is going to help until they figure this one out. Come on, people, it can’t be that hard.

Focusing on the UAW and workers' wages lets Detroit off for its failure to manufacture better, more appealing cars. Moreover, lowering compensation so that it would be more comparable to that of employees of the foreign-owned manufacturers would reduce the cost of a car by approximately $800 according to the New York Times. "An extra $800 per vehicle would certainly help Detroit, but the Big Three already often sell their cars for about $2,500 less than equivalent cars from Japanese companies, analysts at the International Motor Vehicle Program say. Even so, many Americans no longer want to own the cars being made by General Motors, Ford and Chrysler" (emphasis mine).

My own experience as a car owner is a case in point. My first car was a used Dodge Omni I named Captain Quirk because it had more than its share of peculiarities. I can't remember exactly what it was I needed to do every so often under the hood to get the thing to go, but I actually acquired a small amount of car-specific mechanical prowess out of necessity. Everything started to go wrong when the odometer reached about 80,000 miles. All at once Captain Quirk became altogether unreliable.

My next car was a used Dodge Colt. I can’t even remember its name, if it even had one. It also began falling apart at about 80,000 miles. When I finally traded it in, the salesman actually laughed when he saw it. It wouldn't start in the rain -- something about a cracked distributor cap, I think. It was essentially useless. The car dealer was doing me a favor to take it off my hands. 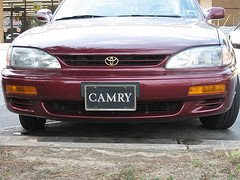 I traded the Colt in for a brand-new 1992 Toyota Camry, which I named Claire, after a friend who had a very old Volvo that was like a member of her family. I knew right away that Claire was a car I would drive for many years and many miles. Just like my friend’s Volvo, Claire became a member of the family. When Tom and I got married, his family dressed her up as a Holstein cow (Wisconsin humor), complete with an inflated rubber glove as the udder.

I’m still driving Claire to this day. She has more than 180,000 miles on her, and the only major repair she has ever needed was to have the radiator replaced. She looks fine, she's comfortable, and she drives beautifully. She has reasonably good gas mileage. I plan to drive Claire until she falls apart beneath me. I’m hoping for another hundred thousand miles or so.

Apparently many Americans have had car-owning experiences not dissimilar to mine. Cars made by the Big Three have been a pain in the arse. Cars made by Japanese-owned companies in particular have been a pleasure to drive, whether or not we are goofy enough to consider them a member of the family.

So, Big Three, your mission is to utterly transform yourselves, inside and out and from every angle. First, build some really great cars that are safe, affordable, comfortable, fuel-efficient, user-friendly, and have plenty of eye appeal. Excise the planned obsolescence. All it ever accomplished was to teach us that you make crappy cars.

Then, hire yourselves some crack marketing wizards. Retire the names Chrysler, GM, and Ford. Just get rid of them. They’re history. All the lemons we have bought from you have left a very sour taste in our mouths that we won’t soon forget. Rebrand yourselves altogether. Come up with zippy new Japanese names, not only for the models but for the companies themselves. We’ve come to associate Japanese names with quality cars. Go with that; exploit it. There’s no trademark on the Japanese language or on Japanese names.

Finally, consider moving your base of operations to another city. Sorry, Detroit. These companies have messed up so badly that the name of the city where their products were manufactured has become synonymous with lemon.

Ultimately, if you Big Three don’t figure out how to make cars Americans want to buy, then all the bailouts in the world aren’t going to keep you from going under.
Posted by Unknown at 4:21 PM