In Wisconsin, as in other states, democracy is being gerrymandered to death, and now is the time for us to put pressure on the Wisconsin legislature to put an end to partisan redistricting.

In 2012, Republicans won just 46 percent of the votes cast in Wisconsin Assembly races, whereas Democrats won 53 percent. And yet 60 percent of that body are Republicans.

Also in 2012, Wisconsinites cast 43,020 more votes for Democrats than Republicans in U.S. House races, but statewide we are "represented" by five Republicans and three Democrats. 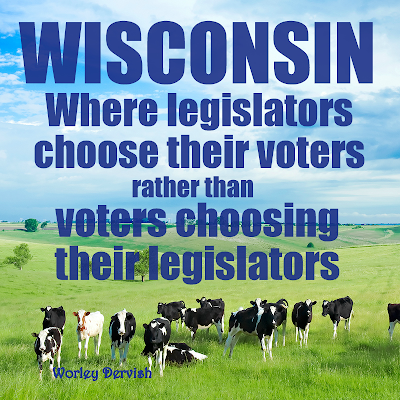 In neither case could you call the election results a mandate. And yet, Republicans are so secure in their gerrymandered little seats that they can openly fly in the face of what the majority of Wisconsinites want. Rather than being concerned with the needs of the majority, the Republicans continually pander to the needs of the corporate backers whose big money put them in office.

According to Bill Lueders of the Wisconsin Center for Investigative Journalism,


In 2012, after a secret and expensive redistricting process, Republicans increased their dominion over the Legislature despite getting fewer total votes than Democrats. They like the current system so much they haven’t even allowed public hearings on bills, AB 185 and SB 163, that would turn this task over to the nonpartisan Legislative Reference Bureau.

In response, media editorial boards across Wisconsin have launched a campaign urging citizens to contact GOP legislative leaders. And records obtained by the Wisconsin Center for Investigative Journalism show that many people are doing so.

And we should, too. Because we seldom have the mainstream media on our side, but in this case we do, along with eight lobby groups such as Common Cause in Wisconsin and the League of Women Voters of Wisconsin. And we should make every effort to take advantage of that.

Even the Wisconsin State Journal published an editorial whose headline says it all:

What's happening here is that the Wisconsin media and citizens lobby groups are attempting to shame the shameless WI GOP into action. Regardless of the outcome, this is a project I want in on.

1. Your state senator and representative. If you're not sure who they are, you can find out here. If you know who they are but need their contact information, check here for the senate and here for the assembly.

It may seem like there's some work involved here, but it's trivial compared with all that stands to be gained and all that has been lost. Besides, how many opportunities do we have to weigh in on the right side of history?
Posted by Unknown at 9:48 PM