JFK: A Day of Remembrance

There are so many quality pieces to read today, on this the fiftieth anniversary of the assassination of President Kennedy that I thought I'd just write a brief post with my personal recollection along with links to several worthwhile posts and articles to mark the occasion.

I remember exactly where I was when I learned that President Kennedy had been shot. I was 7 years old. In the second grade. I was just getting back to school after having been home for lunch. A kid came up to me on the playground outside and said, “The president’s been shot.” I said, “The president of what?” Because I just couldn’t comprehend that the president of the United States could be shot. That was just not possible. Whenever I think about it, I still feel like that shocked little kid. I remember watching the funeral on television with my family. How could it be real? I remember my heart hurting when John-John saluted his father. It never seemed like it could possibly be real. It still doesn’t.

Claire Conner, daughter of two of the ultraconservative John Birch Society's founders, witnessed President Kennedy riding by in the motorcade moments before he was shot. She recounts the experience in her excellent book Wrapped in the Flag. You can read an excerpt about the assassination here. 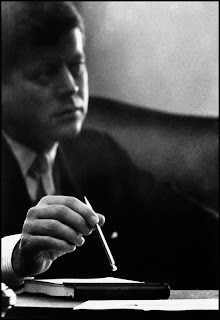 The New York Times has an interactive feature on its 1963 coverage of the assassination here.

One of the best articles is from the Washington Post: "50 Years Later: Four Shattering Days."

And finally, there's this really fine piece from my friend James at the Everlasting GOP Stoppers: "Let Us Begin, Again."

I'm sure I've left out many more fine remembrances, but these are the ones that drew my attention this morning.

Even though I was only seven years old when it happened, it still feels to me as though President Kennedy's assassination fundamentally altered the universe. Of course, what it actually altered was my perception of the universe, of our country. In my seven-year-old mind, it registered that even great leaders could be killed and that the world is a profoundly unpredictable place where heart-rending tragedy can strike in the next bright, golden moment.
Posted by Unknown at 11:42 AM