I have read quotes taken from Howard Zinn's 1970 speech on civil obedience, but I was never so struck by it as I was by a video I came across of Matt Damon reading portions of it. Then I did a little digging and discovered the context of the speech, which was actually an opening statement in a debate on civil disobedience at Johns Hopkins University. It turns out that while he was making the statement he was, in fact, in the middle of an act of civil disobedience:


By the latter part of May 1970, feelings about the war in Vietnam had become almost unbearably intense. In Boston, about a hundred of us decided to sit down at the Boston Army Base and block the road used by buses carrying draftees off to military duty. We were not so daft that we thought we were stopping the flow of soldiers to Vietnam; it was a symbolic act, a statement, a piece of guerrilla warfare. We were all arrested and charged, in the quaint language of an old statute, with "sauntering and loitering" in such a way as to obstruct traffic.

Eight of us refused to plead guilty, insisting on trial by jury, hoping we could persuade the members of the jury that ours was a justified act of civil disobedience. We did not persuade them. We were found guilty, chose jail instead of paying a fine, but the judge, apparently reluctant to have us in jail, gave us forty-eight hours to change our minds, after which we should show up in court to either pay the fine or be jailed.

In the meantime, I had been invited to go to Johns Hopkins University to debate with the philosopher Charles Frankel on the issue of civil disobedience. I decided it would be hypocritical for me, an advocate of civil disobedience, to submit dutifully to the court and thereby skip out on an opportunity to speak to hundreds of students about civil disobedience. So, on the day I was supposed to show up in court in Boston I flew to Baltimore and that evening debated with Charles Frankel. Returning to Boston I decided to meet my morning class, but two detectives were waiting for me, and I was hustled before the court and then spent a couple of days in jail.

When I first stumbled across this video of Matt Damon reading Howard Zinn's statement on civil disobedience, I didn't realize that Damon was reading from Zinn until about three paragraphs in. Damon breathes new life into the 43-year old statement and dynamically delivers its punch as convincingly as if he were Zinn himself.

Here's the portion of Zinn's statement that Damon reads:

If you don't think, if you just listen to TV and read scholarly things, you actually begin to think that things are not so bad, or that just little things are wrong. But you have to get a little detached, and then come back and look at the world, and you are horrified. So we have to start from that supposition—that things are really topsy-turvy. 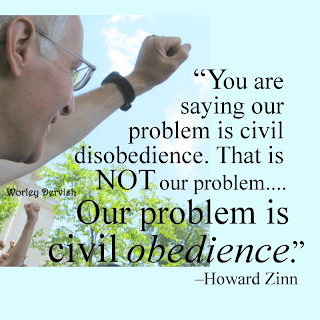 We recognize this for Nazi Germany. We know that the problem there was obedience, that the people obeyed Hitler. People obeyed. That was wrong. They should have challenged, and they should have resisted. And if we were only there, we would have showed them. Even in Stalin's Russia we can understand that; people are obedient, all these herdlike people. ...

When in all the nations of the world, the rule of law is the darling of the leaders and the plague of the people, we ought to begin to recognize this. We have to transcend these national boundaries in our thinking. Nixon and Brezhnev have much more in common with one another than we have with Nixon. J. Edgar Hoover has far more in common with the head of the Soviet secret police than he has with us. It's the international dedication to law and order that binds the leaders of all countries in a comradely bond. That's why we are always surprised when they get together—they smile, they shake hands, they smoke cigars, they really like one another no matter what they say. ...

What we are trying to do, I assume, is really to get back to the principles and aims and spirit of the Declaration of Independence. This spirit is resistance to illegitimate authority and to forces that deprive people of their life and liberty and right to pursue happiness, and therefore under these conditions, it urges the right to alter or abolish their current form of government-and the stress had been on abolish.

But to establish the principles of the Declaration of Independence, we are going to need to go outside the law, to stop obeying the laws that demand killing or that allocate wealth the way it has been done, or that put people in jail for petty technical offenses and keep other people out of jail for enormous crimes.

My hope is that this kind of spirit will take place not just in this country but in other countries, because they all need it. People in all countries need the spirit of disobedience to the state, which is not a metaphysical thing but a thing of force and wealth. And we need a kind of declaration of interdependence among people in all countries of the world who are striving for the same thing.

You can read the entire statement here.