What Does Columbus Have to Do with Me?

Today in my Facebook newsfeed I’ve seen lots of “Rethink Columbus Day” posts. Rethinking Columbus Day is an excellent idea. Yes, let’s do. Celebrating Indigenous Peoples Day sounds great to me. But let’s give indigenous peoples—and our children—more than just a day off in the fall. 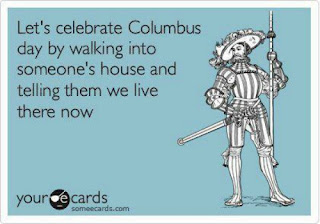 The “Ocean Blue” story so many of us were told about Columbus was not just a story about someone who lived in the fifteenth century. It was a story about ourselves. Here’s how the story goes: We, Americans of western European descent, are explorers, adventurers, and, yes, conquerors. We are bold and sophisticated, excelling in written language, technology, and learning. We are the good guys in the white hats. We are rugged individualists who rely on our own ingenuity and resourcefulness to cross the ocean, the continent, the world.

But just under the surface of the myth lies the bloody truth: western Europeans raped and pillaged the people Columbus “discovered”; they terrorized them with their brutality and forced them into slavery. The truth should make us squirm. This is a discomfort we need to sit with for a while.

We are not who we were told we are. We are not who we thought. No white horses, no white hats. We are descendants of arrogant, avaricious imperialists who thought the only possible value of indigenous peoples of any continent was their monetary value as slaves. I am not saying that we are culpable for our ancestors sins, but I am saying that we are still living with their effects. And until we realize that, and soberly weigh our ancestors’ beliefs and culture—and our own, which stem at least in part from theirs—we will not be able to adequately address the violence, greed, and arrogance from which we sprang.

No, not everything we inherited from our predecessors’ culture is bad. But neither is it nearly so squeaky clean nor so heroic as we once believed. If we believe the lies we tell about our ancestors, we will believe the lies we tell about ourselves. But if we honestly and soberly assess our forebears, we’re much more likely to be able to honestly and soberly assess ourselves. Imperialism is not just a sin of the past. It has not vanished; it has changed its form and focus. Neither are racism, arrogance, and greed confined to the past. There is no virtue in wallowing in guilt or angst, but a sober and truthful assessment of who we were and who we are is necessary if we are to make real progress in the things that really matter. And I believe that when all is said and done, what really matters is how we treat each other, and by “each other” I mean our fellow human beings. 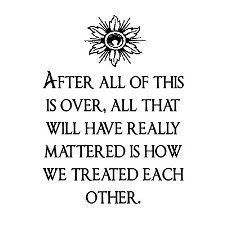 If how you see your ancestors affects how you see yourself (and it does), then so too does how you treat others—all others. If you treat all those you encounter in your life—whether in person, online, in the media, or even just in your imagination—with respect and openness, if you assume that everyone is worthy of your time and attention, then you will also know that you too are worthy. We are not defined by the sins of our ancestors. But the sins of our ancestors will live on until we look at them squarely and see them for what they really are. Then, perhaps, we will be free to cultivate respect and humility and compassion—not only for others, but for ourselves and for our children.
Posted by Unknown at 6:39 PM