No matter how outraged you are, it's impossible to keep up (h/t Lily Tomlin). In last week's installment of "Let's Hope No One's Paying Attention," the Bank of America moved uninsured Merrill derivatives to its commercial bank's federally insured ledgers. In other words, if Bank of America fails, the FDIC must clean up its mess. And apparently the FDIC isn't any too happy about it. But the Fed is reportedly all in favor of the move. Matt Taibbi explains: "Essentially, an irresponsible debtor, B of A, is keeping a loan shark from breaking his legs by getting his rich parents to co-sign his loan. The parents in this metaphor would be the FDIC." Actually, the "parents" would be both the FDIC (Mom) and the Federal Reserve (Dad). But Dad is egging the miscreant on instead of calling him to account.
The Federal Deposits Insurance Corporation was created by the Glass-Steagall Act of 1933, when Depression with a capital D had brought the country to its knees, leading to the bank panic of 1933. The Glass-Steagall Act separated investment banking from commercial banking in order to protect depositors (like you and me) from the risk inherent in investment banking. In effect, it prevented Wall Street from gambling with money deposited in commercial banks. And it created the FDIC to protect commercial banks' deposits. 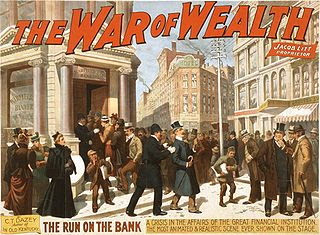 In 1999, Republicans, enjoying a majority in both chambers of Congress and counting on nobody paying attention (all too often a safe bet), passed the Gramm-Leach-Bliley Act, which repealed the part of Glass-Steagall that prohibited a single institution from acting as any combination of an investment bank, a commercial bank, and an insurance company. During the debate over the Gramm-Leach-Bliley Act, Rep. John Dingall (D-Michigan), eloquently warned of the consequences: "Under of this legislation ... liability in one area is going to fall over in the liability of the next. Taxpayers are going to be called upon to cure the failures that we're creating tonight. And it's going to cost a lot of money."
So the riskier Merrill Lynch liability is now spilling over into the federally insured liability of Bank of America's commercial operation. And, as predicted, taxpayers are being called upon to cure the failures created by Congress in 1999. Jonathan Weil reports:

Unfortunately, none of the actors here went on the record to explain what's going on. We don't know what kinds of derivatives these are, or even the dollars at stake, only that they are big enough to make the FDIC upset. The entire story would be playing out in secret were it not for some unidentified whistleblowers who seem to have this crazy idea that the public should be informed about what the regulators and Bank of America are up to.

We've been told the Dodd-Frank Act passed by Congress last year would end federal bailouts of large banks. It doesn't exactly do that, though. Taxpayer money still would be at risk in the event that the FDIC has to exercise its new resolution powers. ... While the law says the FDIC is supposed to tap the banking industry to pay for any eventual losses, it's hard to imagine the agency could ever charge enough to cover the costs from a failure at a company with $2.2 trillion of assets.

So in spite of the outcry of Occupy Wall Street, the behemoth Bank of America, in all of its too-big-to-fail glory, is still acting as though no one is paying any attention. Hiding behind the voluminous skirts of the FDIC, whose deposit insurance "is backed by the full faith and credit of the United States government," B of A continues its dance of privatized profits backed by socialized risk. Where are the decriers of socialism when you need them?
Posted by Unknown at 8:53 AM