Save Us from the Madness

In a segment of her show Thursday night, Rachel Maddow focused on Senate Chaplain Barry Black, whose morning prayers aren't pulling any punches:

Arlette Saenz on "The Note Blog" at ABC News says that "from the onset of the government shutdown, Black has turned his prayers into punditry, urging Congress to find a way to reopen the government. I would suggest that prayers may often sound like punditry. When we pray for peace, we're opining that peace is better than war. As a resident of Wisconsin, "save us from the madness" is a prayer I've uttered many a time. 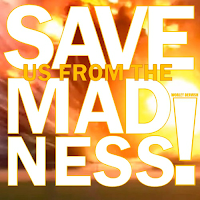 Like many others, I find the shutdown extremely disheartening. Sickening even. I'm tempted to write that the inmates have taken over the asylum, but I don't want to cast aspersions on inmates in general, who are undoubtedly saner than the Tea Party Confederates currently holding the country hostage. At the New York Times, Timothy Egan comes right out and calls the GOP the "Party of Madness":


About 30 or so Republicans in the House, bunkered in gerrymandered districts while breathing the oxygen of delusion, are now part of a cast of miscreants who have stood firmly on the wrong side of history.

In considering Joan Walsh's assertion that the shutdown is the culmination of 50 years of GOP race-baiting, Andrew Sullivan suggests that the impeachment of Bill Clinton was


the first sign of madness when the Democrats first truly wielded power after the Southern Strategy bore fruit under Reagan. ... In the end, I could only explain the foam-flecked frenzy of opposition to Clinton and Obama by the sense that the Civil Rights Revolution of the 1960s was the defining event for a certain generation, that the backlash to it was seen as a restoration of the right people running the country (i.e. no minorities with real clout), and that Clinton’s and even more Obama’s victories meant this narrative was revealed as an illusion. This is compounded by racial and cultural panic—against gays, immigrants, Muslims, Latinos etc—and cemented by a moronic, literalist, utterly politicized version of Christianity. This mindset—what I have called the "fundamentalist psyche"—is what is fueling the rage. ... It is inherently irrational. 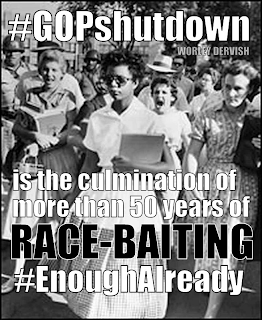 This irrational "foam-flecked frenzy" of racism and cynical race-baiting has plagued us as a nation for far too long. Enough already with the Southern Strategy. It has hurt all of us. Deeply. It's time for those of us who are offended and horrified by the madness to put our collective foot down, to rise up and speak up and keep doing so until sanity prevails. There is no refuge in silence. Silence = complicity = a never-ending reign of madness. Listen to the beautiful resonance of the chaplain's voice:


Have mercy upon us, oh God, and save us from the madness.