Do You Hear the People Sing? Saving the World One Sing Along at a Time

Earlier this week, the Texas Solidarity Sing Along (yes! there's one in Texas!) posted a link on Facebook titled "Have your say: Can protest songs really change the world?" I'm so glad you asked! And, why yes, I believe they can! The folks at ONE, an advocacy organization cofounded by Bono and dedicated to ending extreme poverty, have since June been engaged in an effort they call "agit8: Iconic protest songs that have changed the world," which features high-profile performers recording their versions of some well-known, some less-well-known protest songs. The aim is to inspire people all around the world to take action.

I wholeheartedly applaud their efforts. The way we get music to people anymore is via their favorite performers. Listening is all well and good, and it's a necessary first step. But it's very passive and therefore delivers only some of music's true magic, which has been part of the human experience since before David played his lyre to soothe Saul's troubled soul. Look closely at the poster created for this laudable project:

It displays the words "come together" in large type. Like coming together for a performance? No. Like raising our voices together? Yes! Just as it says, that's when extraordinary things can happen. 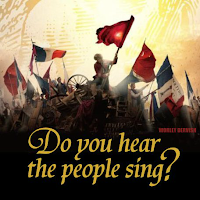 Like the Singing Revolution that took place in Estonia in the late 1980s, in which, according to the documentary film, three distinct Estonian political groups sang their way to unity and a nonviolent revolution that freed them from Soviet rule. Like people all over the world who have been so inspired by the song "Do You Hear the People Sing?" from Les Misérables that it's been heard from Turkey to Taiwan.

Here in Madison, Wisconsin, many of us know firsthand about those extraordinary things that can happen, because we participate regularly in the Solidarity Sing Along, which has been meeting every weekday from noon to one at the state capitol since March 11, 2011. And lately some of us have also been meeting every evening at about 5pm at the capitol to sing until the building closes at 6.

If you're local and you're not sure you're ready to sing in the halls of power, you might want to check out the Madison Song Circle, which meets every Wednesday, 6:30-8:30pm, at the Cardinal Bar, 418 E. Wilson. We sing from the Rise Up Singing songbooks in the tradition of a song circle, where we go around the circle and everyone, time permitting, has a chance to choose a song for the group to sing together. Many of us have gotten hooked on singing together. It keeps us energized, focused, hopeful, and connected to each other.


I can hear some of you thinking, "Okay, well, that's nice, but I don't sing." Au contraire. Yes, you do. You may not sing well, you may not feel confident about your singing, but you can sing. In a supportive group. The point is not how well you sing, but simply that you sing. With your friends, with your community. And if you think it couldn't possibly make a difference, think again. Why has the Walker administration tried so hard to silence us, arresting and handcuffing hundreds just because we gather in the rotunda to exercise our right to free speech by singing together about our dissatisfaction with what's happening in our state? Because they know and fear not only the power of our collective voices but also the power of our solidarity with each other. 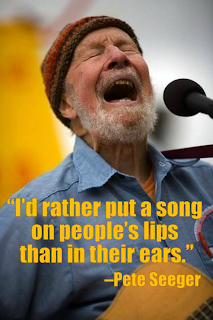 Folks in Texas as well as in Michigan have decided it is time to sing truth to power in their state capitols too. If you're eager to start a solidarity sing along in your state, you can download a copy of Wisconsin's Solidarity Sing Along songbook for free here. Many of the songs have Wisconsin-specific lyrics, so you'll want to put together your own songbook, but this will give you a good idea of what works in Wisconsin, and many of the songs are easily adaptable to other states, especially seeing as how the Republican-controlled states are all working from the ALEC playbook. The fight in Wisconsin is the same as the fight in Texas as the fight in Michigan as the fight in North Carolina as the fight in Turkey as the the fight in Italy... All over the world, people are oppressed and in pain; they feel discouraged and isolated and powerless. And the magic of singing together can help in surprising ways.

For music to really work its magic, it's not enough, as Pete Seeger would say, to put songs in people's ears. You have to put them on their lips. Pete has long advocated starting a singing movement. He would love what's happening here in Madison. What I have learned from Pete over the years is that singing together builds community. It builds strong community. And strong community is exactly what we need in these dark times. 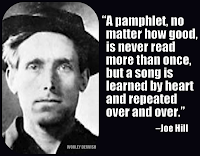 Some of the people I've sung with at the SSA, I've never had a single face-to-face conversation with. But singing truth to power has bound our hearts more tightly than it's possible to describe. We are a loose collective, analogous to a neighborhood pickup basketball game, composed of Democrats, independents, anarchists, Greens, Wobblies, teachers, retirees, veterans, union members... Given that our governor has expressly stated his goal to divide and conquer, our solidarity is unquestionably a force to be reckoned with, so much so that the state Department of Administration has done everything it can think of to silence us. Thus far, to no avail.

Several days ago, my friend Rebecca Kemble wrote this in a Facebook post decrying the overwhelming global forces aligned against us:

The forces arrayed against us are powerful, and they're determined to divide and conquer us, in the worst ways possible. Rebecca is right. Our only recourse is to hold fast to each other, in spite of our differences, in spite of our fears. The solidarity that's required isn't the artificial kind that comes from just taking your cue from the people in charge. It's the kind where you know that no matter what happens, there's a whole slew of people at the ready who will have your back and not back down. 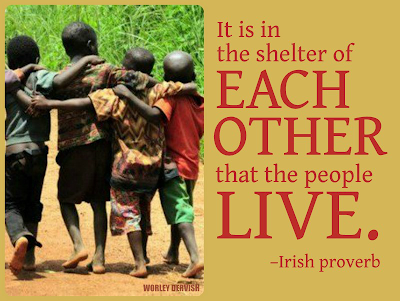 One of the best ways to build such a community, to keep our spirits and energy up in the face of overwhelming global corporate power, is to sing together. Often. Loudly. Vociferously. The more we sing, the stronger and more united we'll be. When it's time to run for the barricades, we won't be caught fumbling for our songbooks. Not that songbooks are bad, but it's a good idea to keep a ready arsenal of songs that can flow from hearts to mouths to the ears of those in power at a moment's notice. If we do, there's no doubt that extraordinary things will happen and that we will indeed change the world.