Madison Mayor Paul Soglin threw a hissy fit yesterday about Occupy Madison, which he is determined to evict and close down—end of story—at the end of the month. And boy howdy was Soglin ever on the defensive. When it was suggested that the site didn't cost the city anything, he said, "That is one of the most narrow, selfish statements I have ever heard." Really, Mr. Mayor?

The highly visible Occupy encampment is located on the 800 block of E. Washington Ave. and currently houses about fifty women and men, which is, according to residents, as many as have lived there since the site was first occupied. The project is both innovative and empowering to its residents. The costs to the city have indeed been minimal, especially considering that the public service costs Soglin complains about would likely be incurred on behalf of the residents regardless of whether they were occupying the site on East Wash., sleeping in window wells, or staying at one of the city's shelters. Unlike the Occupy encampment, the shelters limit the number of nights people can stay and require that they leave during the day. So every morning they're back out on the streets, with no place to keep their things and few sources of support. But the Occupy encampment is different. It is run for and by those who live there and has come to mean a great deal to them.

And it's not like the Occupiers are asking for all that much. They'd like an extension so they can stay on the East Wash. site until the end of June (just two more months), and then they'd like the city to help them find another location. They're asking for a modicum of support so that they can continue helping and empowering themselves. 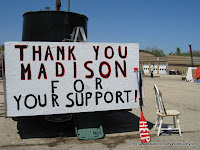 Fortunately, Occupy Madison has some friends on the Madison Common Council. In a meeting tonight at 6:30pm (second floor of the City-County Building), the council will consider a resolution to extend the Occupiers' permit until June 30. Soglin called yesterday's news conference to register his vehement objection to the very modest resolution.

By Soglin's own admission, the needs of Madison's poor have multiplied in recent years. "'When I left office in '97, 28 percent of the children enrolled in Madison Public Schools came from families living at or below the poverty line,' Soglin said. 'That number is now 58 percent ... as poverty and homelessness grows, the base for funding it shrinks." So in other words, the needs are greater while resources are fewer. Should we not then explore new ways to meet those needs, especially ones that cost little and empower those who need help?

And those who need help could be any one of us at any time. An alarming number of us are one major medical bill away from poverty and homelessness. When the city turns its back on the homeless—or even just some of the homeless—it's turning its back on all of us. This is a conversation about who we are. Are we a city that cares for its image more than for its residents? Are we more concerned about our reputation than our people?

Soglin squawked that "'it is highly irresponsible for anyone to suggest that this city's response to homelessness and poverty is anything less than stellar. We cannot be everything to everyone,' he told the news reporters, homeless people and housing advocates who packed the conference room next to his office for a news conference Monday afternoon.'"

Wouldn't a really "stellar" response to homelessness include pursuing low-cost opportunities to improve and broaden the services offered? If Soglin gets his way, Madison will lose a great opportunity to help some of our most vulnerable neighbors, to empower these Madisonians to help themselves and others in similar circumstances. Now what exactly are you calling narrow and selfish, Mr. Mayor?
Posted by Unknown at 3:26 PM