Perhaps you've been following the hullabaloo surrounding the Wausau Labor Day parade. First, the heroic Marathon County Labor Council disinvited local Republican politicians because of their anti-labor activities. Sensible enough. Would you force your kid to play nice with the schoolyard bullies? Apparently Mayor Tipple would. Tipple told the labor council that if the Republicans weren't allowed to march in the parade, then the council would have to reimburse the city for its expenses (insurance, police protection, etc.). 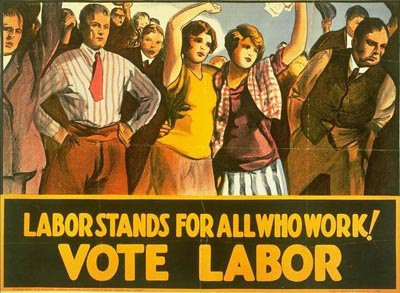 Now the labor council president, Randy Radtke, has announced that the Republican politicians will be un-disinvited. The Wausau Daily Herald reports that Radtke sent the following statement in an e-mail:

We didn't start this fight in Wisconsin, but were responding to anti-worker positions and policies supported by local Republican politicians, including those who have complained about not being invited. With the track records that Pam Galloway, Sean Duffy, Scott Walker, and Jerry Petrowski have all put together this year, they should be ashamed to even show their faces at a Labor Day parade. [emphasis added]

But show their faces they will—maybe. If they have the nerve. If you're not sure you will recognize those faces if they do turn up, click on the links in this paragraph to refresh your memory. Apparently, Republican U.S. Rep. Sean Duffy (you remember him—he's the guy who complained about his measly $174,000 annual salary and the horrors of having to drive a used minivan) has said he will attend a Labor Day celebration in Merrill, Wis. But maybe State Senator Pam Galloway and State Assembly Rep. Jerry Petrowski will show up. You never know.

Have you ever been to Wausau? It sits just across the Wisconsin River from Rib Mountain, and it's just two and a half hours from Madison, straight up Rt. 51. The parade is on Monday, September 5 at 4 pm. The parade route starts on North Third Ave. at West Wausau Ave. and continues south on Third Ave. to Stewart Ave. (see map below). Whaddaya say come Labor Day we head on up there and show some union pride? I understand that some Wausau workers would be honored if workers from around Wisconsin would join them. And from all the hullabaloo, I'd say they could use some Labor Day solidarity. I'm not encouraging mayhem, mind you. Just some good, sensible, hard-working Wisconsinites who know when to cheer and when not to.

Update: According to the Wausau Daily Herald, Galloway and Duffy will be at the Wausau Labor Day parade. Galloway says she hopes the event "will be about families watching a parade [read: never mind what Labor Day is really about]—not politics," even though the politicians will now be allowed to do their politicking. According to the Herald, "Galloway said she is a little concerned that the conflict will 'poison the well' of the typically feel-good event." Who's poisoning whose well do you think?

Duffy says he'll be there with his kids: "I'm thrilled the organizers of this event [were bullied into setting] aside political differences. . . . The unfortunate truth is Wisconsin's political environment has become so toxic these days [Surprising, isn't it, how people get a little pissy when you take their rights away.] that even parades [meant to celebrate the people we have screwed] are seen as a chance to take political swipes at each other."

No indication yet whether Petrowski will be there.