When Tom and I first got together (in 1990), neither of us was all that politically engaged. We voted and played "catch-up education" before each election in hopes we would make an informed choice on the ballot. But that was pretty much the extent of our political participation. We kept up with current events only sporadically.

Then in 1991 we had the good fortune to move to Madison, Wisconsin. We were amused to find that the result of the first local election we were here for was a huge win for the Democrats, followed not all that distantly by the Labor-Farm Party, and the Republicans came in way behind that. Maybe there's something in the water here.... 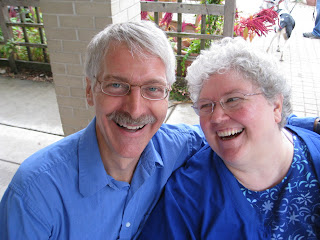 Tom was the one who started paying closer attention first. He read Paul Krugman and Molly Ivins (Oh, how I miss Molly!) and lots more. He'd buy the New York Times on Sundays, and we'd talk about what he was reading. He'd clip things from the paper for me, read out loud to me, and we'd talk and talk and talk.

Those conversations were like a Great Awakening for me. I was the youngest in my family growing up, and I never felt like anybody was ever interested in my opinion, or even considered that I might have one. But at last, in the cauldron of marriage and Madison and the Internet, my opinions and perspective began to take shape.

Eventually the conversations morphed into my new life online, which eventually expressed itself in this blog. But thus far, to me at least, it has felt like part of the conversation was missing (except for those occasions when Tom added his two cents in the form of a comment). This past weekend, though, I sent Tom an e-mail invitation to come blog with me (romantic, ain't it?), and careful observers will have noticed that he graciously accepted my invitation.

You'll be able to tell which one of us is writing by the by-line at the bottom left-hand corner of the post. (If you're reading the post on Facebook, though, you'll just have to guess, or click on "View Original Post" to see who wrote it.)

For me, this addition represents a welcome continuation of the conversations that began fifteen years or so ago. Those conversations now recommence in a new form: more Worleys, more dervish. Welcome to the blogosphere, honey!
Posted by Unknown at 4:26 PM