Pete knows that a song is way more than a song and that music is the best way to make peace and progress in the world. He doesn't underestimate the power of a small group of people to effect change, especially if they are singing. He doesn't just sing songs, he believes in what he's singing and in the power of song to build bridges and communities, to heal broken hearts, and to open closed minds. 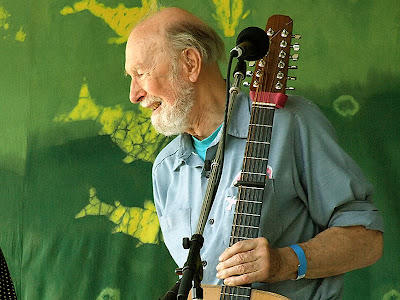 Pete is 89 years old now, and he's still singing and rabble-rousing, just as he has since the 1940s. Many a Saturday afternoon he can be found at the intersection of Routes 9 and 9D in Wappingers Falls, New York, protesting the war in Iraq with another ten or so compatriots. You might not expect someone who has received a Kennedy Center Lifetime Achievement Award to stand on a corner with a handful of other people and sing his discontent. But Pete's not your average performer.

A June New York Times article reports that when asked whether protesting at the side of the road would help end the war, Pete responded, "I don’t think that big things are as effective as people think they are. The last time there was an antiwar demonstration in New York City I said, 'Why not have a hundred little ones?' "

Another "small" effort Pete champions is picking up trash. “This is my religion now," he is quoted as saying in the same article. "Picking up trash. You do a little bit wherever you are.” What a lovely, tidy world it would be if we all did that.

He said that working for peace was like adding sand to a basket on one side of a large scale, trying to tip it one way despite enormous weight on the opposite side.

“Some of us try to add more sand by teaspoons,” he explained. “It’s leaking out as fast as it goes in and they’re all laughing at us. But we’re still getting people with teaspoons. I get letters from people saying, ‘I’m still on the teaspoon brigade.’ ”

The teaspoon brigade. That's about my speed. Some day this summer, I'd love to take my husband and my guitar on a pilgrimage to Wappingers Falls, New York. I'd love nothing better than to sing along with Pete. Of course, I have in fact been doing that for many years now. He's inspired so many of us to take up our guitars, banjos, and teaspoons and get busy.

If Pete is your hero too, go here to sign a petition to nominate him for the Nobel Peace Prize. You can also join a Facebook group with the same goal here. But of course what Pete would most want you to do is keep singing, and keep those teaspoons coming.

In the spirit of the teaspoon brigade, Tom (my husband) and I have added a couple of teaspoons over at "Open for Questions" at Change.gov. Tom works for the U.S. Post Office as an electronics technician, and he's a steward for the American Postal Workers Union. His question:

Will you appoint postal policy makers who will restore USPS' financial ability to serve people, rather than to profit big mailers and private postal companies? Limit discounts to costs avoided? Fully use idle USPS resources before contracting out?

His question has two votes, one of them mine and one his (so maybe these count as quarter teaspoons). If you want to vote yes for Tom's question, search for "USPS financial" and you'll find it.

My two teaspoon questions are as follows:

What will you do to restore the checks and balances in the U.S. government?

(Search for "restore the checks and balances") and

Will you repudiate any claims for the legal force of presidential signing statements and affirm the executive branch's obligation to enforce the law and uphold the Constitution of the United States?

(Search for "repudiate any claims.") My questions each have six votes, and of course there are numerous other questions along the same lines as mine. I have no idea whether the questions will be aggregated to come up with the final count. But anyway, it is nice to make your voice heard. Let's hope the Obama folks really are listening.

Our BIG question, the one from Democrats.com, which we've been tracking for days (see here and here) now is the question with the most votes: 20,357 as of 9:17pm Central Time on Sunday.
Posted by Unknown at 7:10 PM