Solidarity Sing Along: One Day More

Yesterday, Friday the 13th
though it was, was one freakin fantastic day. The Learning Curve, the Solidarity Sing Along's amazing pickup band, sported eight (count 'em, eight!) guitars, two trombones, a concertina, an accordion, two fiddles, two basses (one washtub, one ukelele), a tambourine, a drum, cymbals, a bell, an egg (maraca), a more conventional maraca, three vuvuzelas, a Bulgarian tambura fondly known as the "people's tambura," and—of course—a cowbell. We had a great crowd and the weather was Wisconsin at its September finest.

I posted the brand-spankin-new lyrics online, got a couple of good suggestions for improvements from friends, and another friend volunteered to make photocopies of the new lyrics for the next day's sing along. There's nothing like being part of a talented, generous community for collaboration, inspiration, and solidarity. Miraculously enough, I even managed to get my work project done. By the time I left for the sing along I'd practiced it just barely enough to be able to teach it to everybody. Here's me practicing just before the sing along started:

Thanks to Judith Detert-Moriarty for the video!
Folks seemed to especially like the line about the bald spot.
Heh-heh.

It was wonderful to have singer, songwriter, and tall ship captain Tom Kastle back from his recent travels. Tom often plays banjo for us, but he brought his guitar because he wasn't sure we would have enough. Alas, there was nary a banjo to be seen or heard on Friday, but we were very glad to have Tom there with his guitar. He sang his excellent song "Whose House?" which by popular demand is going into the soon-to-be expanded SSA songbook, along with that brand-spankin-new one, "One Day More."


The highlight of this already fabulous sing along was when my state senator, Mark Miller, showed up. On July 27, 2013, just a few days after the arrests began in the capitol, I sent him a letter asking for his support for the Solidarity Sing Along. I have written him on numerous occasions in the past and have always heard back from him fairly promptly, so I was disappointed not to have heard back from him. Until yesterday, when he joined us in person at the sing along and thanked us for the work we're doing to stand up for free speech in Wisconsin. He stood next to me before he addressed the crowd. When I first saw him, I said, "Oh, Mark! I'm so glad you're here!" And I clasped his hand tightly for several seconds. I think he knew it meant the world to me for him to be there expressing his support.

Here's what he said (video from Leslie Amsterdam here):


The right to petition, to seek redress from government, is a fundamental principle of any kind of a democratic society, and it is contradictory to that principle to have to seek permission [loud cheers from the crowd]. It’s only by the courage you've shown that the rest of us will be able to maintain that privilege of being able to freely and openly petition and seek redress. So I wanted to thank you. Thank you!

After Senator Miller spoke, we recited Article 1, section 4, of the Wisconsin State Constitution:


The right of the people peaceably to assemble, to consult for the common good, and to petition the government or any department thereof shall never be abridged.

It was impressive to see how many people didn't have to look at the book. Funnily enough, lots of us have that bit memorized!

As if all that weren't enough, then from seemingly out of nowhere, local singer-songwriter Ken Lonnquist materializes, borrows a guitar, and we sing his song "Fourteen Senators," celebrating the Fab14, the senators who fled the state to delay the state legislature's vote on the dreadful 2011 budget-bill-bomb, for Senator Miller. "What's the score? People 14, Governor Walker zero!" It's nice to know that a few of the Fab14 (including Kathleen Vinehout, Jon Erpenbach, and Tim Cullen) are still standing with us, Chris Larson notwithstanding (pun intended). 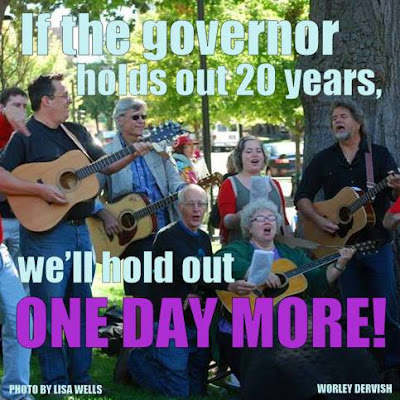 It's been a wild ride in Wisconsin since the days of the Fab14 and the Wisconsin Uprising. The first Solidarity Sing Along was held on March 11, 2011. Singing citizens began receiving citations from the Capitol Police about a year ago, and now arrests in the rotunda seem commonplace. In all that time, only one charge (for the heinous crime of sidewalk chalking!) has stuck, many have been dropped, and many are still winding their way through the slower-than-molasses courts. (The trial for my citation, for supposedly "conducting" on October 31, 2012, has been postponed about four times.)

In part, thanks to Chief Erwin and his heavy-handed crackdown, and mostly thanks to the stalwart people of Wisconsin, the Solidarity Sing Along is still going full tilt, every damn weekday. We are firmly resolved, joyously united, and altogether unintimidated. If—heaven forbid!—Walker holds out twenty years, we'll sing out one day more!
Posted by Unknown at 2:44 PM