What Do "These Protesters" Seek to Gain?

I posted this photo on the Worley Dervish Facebook page this morning:


I don't understand what these protesters seek to gain ? Over 2 years of protest now... Has it accomplished anything ? I am very much for peace and constitutional rights... But, these people are clearly breaking the laws and when you resist arrest Like that guy did... Sometimes regular people trying to do there job and go home get impatient and fed up with the pointless BS ! if you want to change things... Vote ! If enough people agree with you... You win ! If not, you may just be wrong...

Are you saying, dear commenter, that the only forum for civic engagement is the voting booth? There is certainly no harm in singing for an hour a day in a public forum, conceding the space when others have reserved it, and continuing to voice objections in song to the heinous destruction of our state by right-wing legislators and the governor. Leonardo da Vinci said, "Nothing strengthens authority so much as silence." Obviously that silence would be very valuable to the governor, so much so that he is going to extraordinary lengths to silence us. 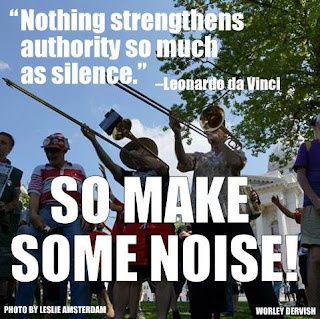 How would it be for us to watch our public schools be trashed, our environment be pillaged, our job numbers continue to lag behind most other states, not to mention corruption (WEDC) and cronyism galore, and our only available recourse be the voting booth, while Republicans seek to disenfranchise voters through gerrymandering and voter i.d. ploys? If you do not understand, it is because you don't want to understand. We will not be silent while our state is being plundered and pillaged.

The Wisconsin State Constitution, Article 1, Section 4: "The right of the people peaceably to assemble, to consult for the common good, and to petition the government or any department thereof shall never be abridged." Never.


Well, we disagree on many things I'm sure. I do not wish to silence the people, I am " the people " I only think more energy should be put into things with good results. This type of protest has been going on for decades.. With never much positive change from it. Much better ways to be heard, I believe.

Also, I am from Illinois, Chicago... As I'm sure you know, my state and city are in fiscal ruins !!! My state government ( democratic super majority ) leads the league in corruption and cronyism !!!

While your governor has balanced the budget from a huge deficit.. Has he not ?

No, the balanced budget is a fiction. Magic with numbers. The Wisconsin Economic Development Corporation (WEDC) has swallowed all kinds of funds it cannot account for. Our state economy is tanking, people are in desperate straits, and things only continue to worsen. And even if the budget were balanced, what good will that do if people have no jobs, our public schools are being suffocated from lack of funds, and our environment is being pillaged?

And incidentally, we sing for only an hour a day. There are many other hours in the day, during which we all do and accomplish a great deal. That hour a day of singing strengthens and encourages us to keep engaged in myriads of ways beyond the ballot box.

And also, it remains to be seen what the results of our singing are. Neither you nor we can begin to know them all. Some of those results are and will be tangible, and some are the things that continue to be knitted into our hearts on a daily basis.
Posted by Unknown at 3:32 PM