The Destruction of the U.S. Postal Service Is Quietly Being Delivered to Madison

Shhh... There’s a Meeting...
The U.S. Postal Service recently announced it was doing an “Area Mail Processing” study to evaluate transfer of some mail-processing operations from Madison to Milwaukee. In other words, the USPS is planning to drastically reduce the size of the processing operation here in Madison, resulting in the loss of first-class mail service as well as 54 jobs in Madison. All mail received from southwestern Wisconsin would be shipped 73 miles from Madison to Milwaukee for processing, and then the portion of that destined for southwestern Wisconsin would be trucked back to Madison for further processing and distribution.

On Wednesday, May 15, at 5pm (too late for media to include it in that day’s news), a public meeting was very quietly announced at which the USPS will share the initial results of the “study,” which it is claimed supports the “business case for consolidation.” The community, postal employees, and the unions were given only 14 days’ notice of the meeting. The material to be presented at that meeting was released only seven days in advance.

The meeting will be held on Wednesday, May 29, 2013, at 7:00pm at the Alliant Energy Center, Exhibition Hall B. If you care about the local economy, local employment, and the continuation of first-class mail service, please plan to be there, and encourage friends and family members to attend as well.

The End of First-Class Mail
When the postal services says its “future network” would support 2- to 3-day service standards, what it’s really saying is that it plans to eliminate first-class mail altogether (even if they still call it that, it won't be first-class service as we now know it). So even a piece of mail going from one side of Madison to the other would be shipped to Milwaukee and back again before being delivered. Currently mail posted before 8pm is processed that same evening. The proposed “revised entry times” would mean that the last collection would be earlier in the day, further slowing mail delivery. 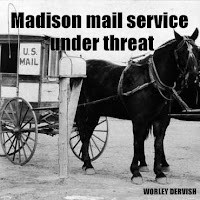 What the USPS is proposing, to take Madison’s outgoing mail processing to Milwaukee, is already being done with Saturday mail. Currently, a letter mailed across town in Madison on a Monday is processed here in Madison and arrives at its destination on Tuesday. But a letter mailed across town on a Saturday is now shipped to Milwaukee on Saturday night, is processed, and then shipped back to Madison for further processing on Monday, and doesn’t arrive at its destination until Tuesday.

Even if first-class mail volume is down, the service is essential and is extremely valuable to residential customers and small businesses. Lower volume does not mean that the service is less valuable or is unnecessary. Moreover, the prices charged for all the different classes of mail are absurdly low. Raising the price for first-class delivery would be far preferable to losing the service altogether. Postmaster General Donahoe says the postal service doesn’t want to raise its rates, but he gives no indication as to why.

Moreover, once first-class mail service is gone, there will be no getting it back. The postal service is piece-by-piece dismantling its processing capabilities, so even were mail volume to increase in the future (which it very possibly could), the postal service would no longer be able to provide first-class service. The public’s only option would be to procure the service through private delivery companies that would charge an astronomically higher price than the USPS.

The USPS’s claim to “preserve the ability to provide and finance secure, reliable and affordable universal delivery service” is specious at best. It’s not going to “enhance commerce” to slow mail delivery.

The Presumed Savings
The postal service spuriously claims that the proposed “consolidation” would save some $5 million per year. But the USPS’s annual revenue is roughly $65 billion per year. Even if the estimated savings were accurate (which they aren’t), and even if the same savings were achieved in a hundred different locations, it would save only a half-billion dollars and would not significantly lower the claimed budget gap of roughly $10 billion per year. These would be shockingly small savings for destroying not only service but also invaluable, irreplaceable infrastructure.

The postal service claims that it has “excess capacity” and that parts of its operation are idle owing to low mail volume. However, the reason for idleness is that mass mailers are given deep discounts for doing sorting work that the USPS would otherwise do. The costs of doing that work are largely fixed costs; we’ve already paid them. We’ve built the plants, acquired the equipment, hired and trained the staff. So having outside mail companies do that work does not save those costs, but huge discounts are granted anyway. In other words, the USPS is giving away the store. It regularly loses large amounts of money because of those huge discounts it grants to bulk mailers.

Postal management claims it will save $4 million per year by eliminating 30 mail-processing jobs (54 fewer in Madison and 24 more in Milwaukee). Yet the eliminations would be the new hires who work part-time for about $15 per hour, with few benefits, making on the order of $15,000 per year each. Thirty fewer such positions would save about half a million dollars. The claim of $4 million in savings is high by a factor of 10 (even if the mail processing and distribution really could be done with 30 fewer employees—rather than more employees, as is likely).

The USPS claims that the consolidation is part of its plan to “protect U.S. taxpayers.” Say what? No tax dollars—no federal funds or appropriations—go to the postal service. Moreover, the way the postal service is supposed to work is that it should charge enough for its services to cover its costs. However, the 2006 Postal Accountability and Enhancement Act tied rate increases to the consumer price index, in spite of fuel costs rising much faster than the CPI. The law also demands $5.5 billion per year to fund 75 years’ worth of future retiree medical costs within ten years—an onerous requirement no other government agency is subject to.

The Costs of Consolidation
At a time when everyone else on the planet is coming up with ways to drive less in order to lower fuel consumption and reduce environmental damage, the USPS is increasing its fuel consumption in the name of cost savings. Transportation and mail-handling costs will rise significantly with the increased movement of mail to and from Milwaukee, causing significant wear and tear on the roads, along with increased traffic congestion (and accidents) and fuel consumption. Not to mention the how the vicissitudes of Wisconsin weather would impact increased shipping during the peak mailing season in December. It’s not a more efficient transportation network when mail is needlessly shipped 150 miles or more because of reduced processing capacity. 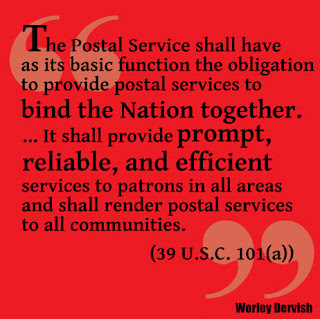 During times of peak volume the efficiency of the mail system will decrease. With slower service, the mail will be in the USPS’s possession longer, thereby clogging up the plants and increasing opportunities for mail to be lost or misdirected. During the month of December, when mail volume is at its yearly peak, both the Madison and Milwaukee processing plants are heavily used. Concentrating all the mail processing from southern Wisconsin in Milwaukee, even if some extra equipment and workers were added there, would seriously clog that plant’s operations, especially in December.

The “consolidation” and other plant closings in Wisconsin represent significant destruction of valuable postal infrastructure that cannot be restored. Already ten mail-processing plants in the area have been or are being closed: Kenosha, Portage, Oshkosh, Wausau, Eau Claire, La Crosse, Rockford IL, Duluth MN, Rochester MN, and Kingsford MI. In areas where plants have closed, service has declined and savings, if any, have not been significant. Further decimation of the infrastructure will severely limit the postal service’s ability to deliver the mail and will result in few if any savings.

Job Losses
Postal management projects that with its consolidation plan it would eliminate 54 jobs in Madison. This smaller workforce, however, would be responsible for the increase in mail-handling and transportation between the Madison and Milwaukee plants. Many career employees in Madison have already been replaced with part-time, low-wage, low-benefit workers. Employees have not been laid off, but they have been transferred to other facilities, some of which are subsequently downsized or closed.

And yet the postal service claims that its proposal will “maintain fairness to employees.” The claim doesn’t square with how employees’ are moved to other locales only to find those jobs also being eliminated. Nor does it square with Postmaster General Donahoe’s assertion that cost savings will be accrued via “worker compensation reforms,” in other words, lower pay.

A Manufactured Crisis with a Simple Solution
The “consolidation” proposal in Madison is part of the relentless ongoing step-by-step march toward privatization. Large commercial mailers, which USPS management frequently refer to as “stakeholders,” don’t want first-class mail service, and they shudder at the thought of paying high enough prices to provide paying postal employees a living wage. Those commercial mailers enjoy constant access to USPS top management; they even have an office inside USPS headquarters in Washington, in the guise of a “Mailers Technical Advisory Committee.” In this and other ways it is the mass mailers who’ve captured control of USPS decision making, and they are the ones pushing for ever-lower costs and the destruction of the postal infrastructure.

The USPS claims that it has a “massive nationwide infrastructure that is no longer financially sustainable.” It claims that its “dire financial position requires urgent action to ensure continued mail delivery and to restore long-term self sufficiency.” But that valuable, irreplaceable infrastructure would indeed be financially sustainable, and the postal service’s financial position would be no longer be so “dire” if only Congress would require the USPS to charge customers enough to cover its costs, free the USPS from the ludicrously burdensome requirement to prefund retirement for yet-to-be-born employees, and require that overly generous discounts to large commercial mailers be discontinued.

Residential Customers’ Postal Board
Heretofore residential customers have not been represented in deliberations concerning the USPS. It is essential, then, that a residential customers’ postal board be formed along the same lines as the Citizens’ Utility Boards. The Residential Customers’ Postal Board would need to hire researchers and lobbyists to work on behalf of the American people, to exercise a counterweight to the outsize influence of the large commercial mailers, to shine a bright light on USPS management and its masters in the mailing industry, and to lobby on behalf of residential customers before the Postal Regulatory Commission, the Postal Board of Governors, USPS management, the U.S. Congress, and the president.

If you’re interested in working toward the formation of a Residential Customers’ Postal Board, please contact us at worleydervish@gmail.com.

Your Action Is Needed
Come to the meeting and make your voice heard: Alliant Energy Center, Exhibition Hall B, on Wednesday at 7pm. Review the talking points and help us make sure each is addressed at the meeting.

Write a letter (postmarked no later than June 13, 2013) opposing the “consolidation plan” and the elimination of first-class mail even if you attend the meeting (sample letter here). Mail the letter to