January 15, 2013, was the day Dr. Martin Luther King Jr. should have been celebrating his 84th birthday. (Was he really only 39 when he was assassinated? I was 11 at the time. I thought 39 was ancient then. Now it seems so very young.) January 15 was also the day of Scott Walker's annual State of the State address, and the day a troubled young man, Kvon Smith, posted on Facebook that he was planning to bring Molotov cocktails to the Capitol.

Having received a heads-up about Smith's plan, and having determined that it was a credible threat, the intrepid Capitol Police, those daring keepers of attendance for the Solidarity Sing Along, commendably notified the state police and, armed with a photo and their keen powers of observation, kept a sharp lookout for Smith.

Toward the end of the sing along, a horde of schoolchildren joined in singing "Solidarity Forever" in the rotunda (video). The video description says it was taken moments before the Capitol Police identified Smith, who was standing in the rotunda, just outside the frame of the video.

However, before that, another young man, Colin Bowden—who resembles Smith only insofar as he too is young, black, and male—was taken into custody by the Capitol Police. Bowden was handcuffed and detained without being told why.

However, state Department of Administration spokesperson Stephanie Marquis claimed that Bowden was taken into custody because he "had all the characteristics of Mr. Smith and was carrying a bag" (emphasis added). 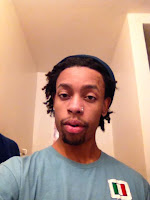 In a statement to friends and supporters on his Facebook page, Bowden had this to say about his experience:


I was told I am a spitting image of the person they thought called in a "serious threat." This is something I was used to in Chicago, not Madison. ... Perhaps the man in this picture looks like me. I doubt it, but I guess people who don't know black people might mix us up. You see, when you get the wrong person because you're looking at color before the facts, you risk losing actual perpetrators. If they had spent more time on investigating and trying to find the actual person instead of any ol' black boy, they might've caught him sooner.

Yet there's no mention of why, if he was identified as soon as he entered the building, it wasn't until he was all the way in the rotunda, surrounded by children and solidarity singers, that he was apprehended, or even why the building was still open when a credible bomb threat had been made.

The following day, the Madison Fire Department confirmed that the liquids in Smith's backpack were neither explosive nor flammable.

Had Smith's backpack actually contained Molotov cocktails, had he acted quickly to ignite them in the rotunda, the misidentification of Bowden could easily have resulted in a terrible tragedy.

Nevertheless, the DOA issued a press release gloating that "Capitol Police protected hundreds of people in the state Capitol by apprehending and arresting Kvon Smith." And the clearly self-satisfied DOA Secretary Mike Huebsch crowed: "A tragedy was avoided and our Capitol remains safe because of the actions of our officers yesterday."

I wonder how safe Colin Bowden feels "because of the actions of our officers" on Tuesday. Or how overjoyed the parents of the children who thronged the rotunda feel about those same actions. And I'm sure Dr. King would have preferred that the Capitol Police mark the anniversary of his birth in a way that better reflected the values that he espoused. 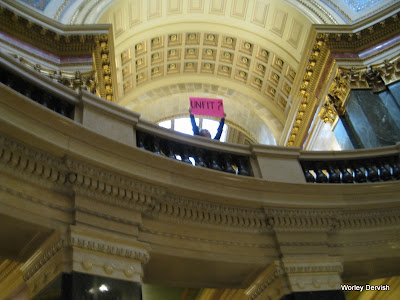 I would venture that the Capitol Police "protected hundreds of people" Tuesday in the same way that they daily protect the citizens of Wisconsin from the nefarious noon-hour activities of the Solidarity Sing Along, especially the oh-so-hazardous banners.

Update: Colin Bowden has started a petition on Change.org demanding an end to racial profiling in the Wisconsin State Capitol. Please sign the petition and ask others to as well.


# # #
Thanks to Judith Detert-Moriarty for her photo of Colin Bowden. The photo of Kvon Smith was obtained from the public portion of his Facebook profile. Thanks to Arthur Kohl-Riggs for the video of Kvon Smith's arrest.
Posted by Unknown at 9:24 PM