The Greater of Two Evils

Some good folks on the left of the political spectrum, many of whom I respect very much, dismiss the notion of voting for the lesser of two evils. Certainly doing so can be disheartening and demoralizing. It can feel like there's little real choice involved. When do we get to say what we really need, register our outrage at what offends us so deeply? But in these evil times, in this corrupt winner-take-all political system of ours, pragmatism points to just such a choice.

I appreciate that many women, families, and workers will likely do better with Obama in office for another four years. But given the drones, the war in Afghanistan, the NDAA, the record number of deportations, I cannot bring myself to vote for Obama. In other words, I am not "in."

On the other hand, I will not miss the opportunity to vote against Mitt "Corporations-Are-People-My-Friend" Romney. 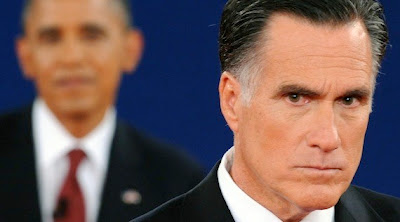 Romney is so saturated with privilege that he thinks the American people should vote for him and his so-called five-point plan without him divulging any details or offering any substance to indicate that the math might actually add up. (It doesn't.) We're supposed to just trust him. (*eyeroll*) He's so truth-challenged that he doesn't seem to know the difference between truth and lies. And far worse, he doesn't seem to care.

Romney treats the American people ("you people") with only the most thinly veiled contempt. He seems to think he's entitled to the presidency, and he's willing to do anything and say anything to make sure he gets it. I can't imagine a more dangerous creature for our people or for the planet. Someone so morally bankrupt should absolutely not be allowed to choose the next two or three members of the Supreme Court, not to mention commanding the most powerful military force the Earth has ever known.

Daniel Ellsberg writes eloquently about the urgency of preventing a Romney presidency:


As Noam Chomsky said recently, "The Republican organization today is extremely dangerous, not just to this country, but to the world. It's worth expending some effort to prevent their rise to power, without sowing illusions about the Democratic alternatives." ...

The election is at this moment a toss-up. That means this is one of the uncommon occasions when we progressives—a small minority of the electorate—could actually have a significant influence on the outcome of a national election, swinging it one way or the other.

The only way for progressives and Democrats to block Romney from office, at this date, is to persuade enough people in swing states to vote for Obama: not stay home, or vote for someone else. And that has to include, in those states, progressives and disillusioned liberals who are at this moment inclined not to vote at all or to vote for a third-party candidate (because like me they've been not just disappointed but disgusted and enraged by much of what Obama has done in the last four years and will probably keep doing).

They have to be persuaded to vote, and to vote in a battleground state for Obama, not anyone else, despite the terrible flaws of the less-bad candidate, the incumbent. That's not easy. As I see it, that's precisely the "effort" Noam is referring to as worth expending right now to prevent the Republicans' rise to power. And it will take progressives—some of you reading this, I hope—to make that effort of persuasion effectively.

In a little more than two weeks, I will be voting enthusiastically for Tammy Baldwin to be my senator and for Mark Pocan to be my representative. And as for that other race, as I draw a line next to Obama's name, the enthusiasm involved will be in my wholehearted desire to prevent the greater of two evils.