Most weekdays I watch the videos from the previous night's Rachel Maddow Show, and, as you can well imagine, very often I join in the discussion myself. Yesterday Thomas Frank, author of Pity the Billionaire, was one of Rachel's guests:
Thomas: You and I can sit here and say we’ve been engaged in conservative politics in this country for 30, maybe 40 years ... privatizing, deregulating, deunionizing, outsourcing, all of this sort of thing, but their answer to that is, "Uh-uh. We just haven’t gone far enough. And we’ll never be prosperous again until the day we deregulate all the way and we privatize everything. Until then you can’t say that laissez-faire or the free market has been discredited, because we haven’t been allowed to do every last little thing that we want." ...

Rachel: Your thesis absolutely has helped me understand what happened in 2010 and how the simplistic—incredible but simplistic—and vehement argument that sounds simple and effective repeated loudly can work. ... 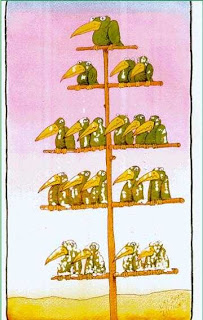 Me: So this explains why the "trickle-down economics," "government-is-the-problem," "deregulate-and-privatize-everything" ideas still have traction? Because they've been repeated loudly and vehemently and often enough? No wonder it seems like so much of public discourse has become a fact-free zone.

Perhaps this touches on one of progressives' greatest difficulties. We like reasoned discussions; we like exchanging ideas of merit; we like refuting right-wing pundits' assertions. But when we do that, we often respond using the right's own language and ideas; we let them frame the discussion and we don't get to our own frames.

George: Progressives have a basic morality, which is largely unspoken. It has to be spoken, over and over, in every corner of our country. Progressives need to be both thinking and talking about their view of a moral democracy, about how a robust Public is necessary for private success, about all that the Public gives us, about the benefits of health, about a Market for All not a Greed Market, about regulation as protection, about revenue and investment, about corporations that keep wages low when profits are high, about how most of the rich earn a lot of their money without making anything or serving anyone, about how corporations govern your life for their profit not yours, about real food, about corporate and military waste, about the moral and social role of unions, about how global warming causes the increasingly monstrous effects of weather disasters, about how to save and preserve nature.

Progressives have magnificent stories of their own to tell. They need to be telling them nonstop.

Me: So in essence, this is what the right has been doing so effectively. They have hammered on their talking points until everyone is parroting them, not just the party faithful. Of course, it doesn't hurt that the right has its own 24/7 propaganda machine that happily reiterates right-wing frames over and over again. Still, you have to admit, they've been good at this stuff and progressives have not.
In the coming election year, beloveds, let's quit reacting to the right's provocations and focus like a laser on what we believe in: representative democracy, clean and transparent government, opportunity for all, the common good, the Bill of Rights, the well-being of the 99%, social as well as individual responsibility, inclusiveness and diversity, and compassion and empathy.
Posted by Unknown at 2:51 PM